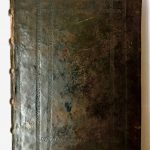 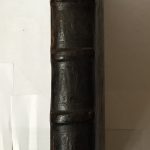 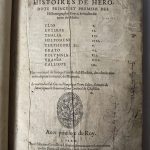 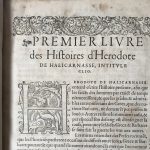 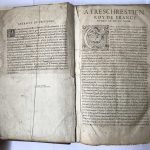 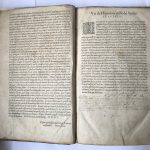 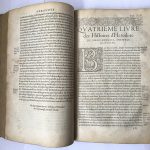 First French edition of the Histories of Herodotus of Halicarnassus, the great Greek historian who lived in the fifth century before Christ. The ‘Histories’ is a comprehensive early account of the war between the barbarians and Greeks, which took place during a two-hundred-years period from King Gyges of Lydia to the conquest of Sestos by the Athenians in 478 B.C. The humanist Pierre Saliat (fl. 1537-56) translated this work in French for the first time. The first three books were published in 1552. Saliat also translated works of Aristotle, Cicero, Erasmus, Philo of Alexandria, and Sallust. The present work also included a translation of an appendix by a fifteenth-century Byzantine scholar, George Gemistus Plethon. New editions of Saliat’s Herodotus were issued in 1575 and 1580. The book was a source for Montaigne’s “Essais” (see Joseph de Zangroniz, “Montaigne, Amyot et Saliat”, Paris 1906, pp.102-4).