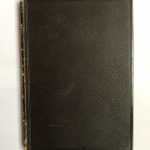 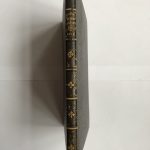 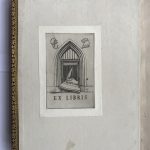 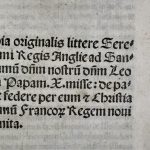 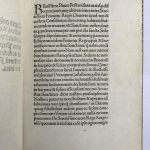 A political letter from Henry VIII to Pope Leo X of Rome, written by the King when he was only 23 years of age; it is a rare piece of printed diplomatic correspondence from the last decades of England as a Catholic monarchy. It seems to be the third of the Henry’s letters to be printed. This type of Rome publication concerning the King of England would become unknown after the Reformation. The letter concerns the peace concluded 7 August 1514 between Henry VIII and Louis XII, which included a marriage between Mary Tudor, sister of the King of England, and Louis XII. Mary became King Louis’s third wife. The negotiations followed the English invasion of France in 1513, during which the king had personally taken part in sieges against Therouanne and Tournai and at the battle of Guinegatte. One purpose of a French alliance, for Henry, was to counter the power of his father-in-law, the king of Aragon, with whom there were political frictions (about the peace treaty the King writes: ‘I have not mentioned a single thing to the truly most serene King of Aragon because he greatly enjoys dealing with his affairs by himself’ *). The marriage took place on 9 October 1514, but peace with France ended in 1515 with the death of Louis XII and the accession of Francis I.

Bibliography: A very rare publication, particularly in the trade: this is the only copy recorded at auction since 1975. Institutional holdings of this book are few: we have located two copies on the continent (Bibliothèque Nationale and Venice Marciana) and three in Britain (two in the British Library and one in the Bodleian Library at Oxford). OCLC WorldCat notes three in the U.S. (Yale, Harvard and New York Public Library).