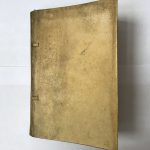 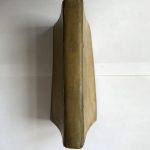 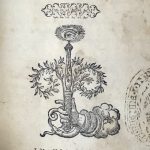 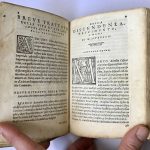 8vo, pp. (xxxii) 287 (i), a-b8 A-S8. Italic letter, a little Roman. Title-page vignette of a human arm coming out of a cloud, bearing a candelabrum with the divine Eye of Providence above the kindle. Decorated initials, a large ms. manicula on p. 98, occasional underlining. Early autograph/inscription on t-p of “A. R. P. Mons. [Al Reverendo Padre Monsignor?] Philippi Tommasini…”. Given that this is a biographical and anecdotal work dedicated to a great learned man of the past, could this person be identified with Cardinal Giacomo Filippo Tomasini 1595-1655, the erudite and early historian of Italian literature who compiled collections of biographies and anecdotes regarding the most important writers of the tradition? Browning and spotting throughout, some soiling and waterstaining. Two blurred library stamps, on t-p and blank verso of final leaf (Cardinals coat of arms in the centre). Bound in stiff early vellum.

Antonio de Guevara (1481-1545) was a Franciscan monk, historian, Bishop of Guadix (1528) and Mondoñedo (1537). Born is Asturias, he died in Villadolid. This work is devoted to the Roman Emperor Marcus Aurelius and it illustrates: “his life, deeds, habits, speeches and letters”. He has always been considered as a virtuous historic character for his exemplary life, deserving imitation. Fifteenth- and sixteenth-century humanists, and generally the Western tradition, have always highly appreciated the figure of Marcus Aurelius in his capacity of just ruler and wise philosopher. The printer Francesco Bindoni, called the Younger, was active in Venice and took the printing press over from his father Francesco Bindoni the Elder. His offspring continued the activity after him.