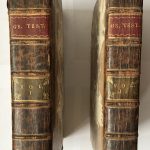 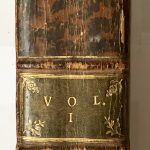 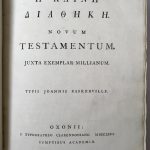 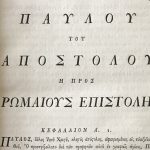 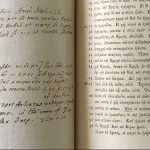 FIRST EDITION (only 500 copies published). 2 vols in a very large 4to format with “signatures in twos. Text not divided into verses but with verse-numbers given in the margin” (Darlow & Moule, 4755); 415 pp. plus title-page, lacking the initial half-title; this copy was specially bound for William Newcome (1729-1800), Archbishop of Armagh, Primate of All Ireland, with interleaved blank sheets throughout and ten additional initial and final blanks in both volumes: Matthew and Luke, pp. 1-236, in Vol. I, and Paul and John, pp. 236-415, in Vol. II. Copiously annotated and underlined by the owner, who left his autograph on the top right corner of the t-p. The books are provided with plenty of philological observations and references to classical authors, both Greek and Latin, and comparisons with critical studies of the bible by other eminent scholars. Contemporary bindings: calf over gilt spine in compartments with red morocco label, vellum corners, marble paper over thick boards. Covers, joints and edges rubbed, 1st vol.’s head of spine slightly damaged. Notwithstanding, an appealing binding. A clean, wide-margined and unique copy.

This edition shows the Greek types designed by the celebrated printer John Baskerville (1706- 1775). It mostly reproduces the text edited by John Mill (1707), which is “perhaps the most famous Greek Testament of the eighteenth century […] a reprint of Stephanus’ text of 1550, with a very few slight variations.” (Darlow & Moule, 4725).

“The press made one purchase from Baskerville. By the time that he approached the Delegates with a proposal for a new great primer Greek in June 1758, Savile’s Greek types had become unfashionable. Baskerville had been cutting types for just five years but was sufficiently convincing for the Delegates to order ‘a new Set of Greek Puncheons, matrices and moulds, in Great Primer’ and 3 hundredweight of type. Once the type arrived in 1761, the workmen were paid to set up and print two samples for a new Greek Testament, one in the new type and the other in ‘the Large Greek’. On the basis of this comparative specimens the Delegates agreed that a ‘Greek Testament in Quarto and Octavo be printed on Baskerville’s Letter’. However, no more type was ever bought from Baskerville”. Gadd (ed.), The History of the Oxford University Press I, p.222).

The owner of this copy was the Rev. William Newcome. He studied at Abingdon School but later moved to Oxford after receiving a scholarship for Pembroke College. Newcome subsequently graduated in theology from Hertford College. His elevation to the primacy was said to be granted by King George III. His appointment was described by James Caulfeild, 1st Earl of Charlemont, as the reward of character, principles, and erudition. A fine classical scholar, imbued with an excellent knowledge of Ancient Greek and Latin, Newcome is especially remembered for ‘An attempt toward revising our English translation of the Greek Scriptures, and toward illustrating the sense by philological and explanatory notes’ (1796) (commonly known as ‘Archbishop Newcome’s new translation’). This is Newcome’s working copy of the Greek edition of the New Testament, which he copiously annotated with notes regarding important words within the text.

Newcome worked at a revision of the whole English Bible, of which ‘An Attempt’ was the New Testament. In the preface to his work, he declares:

“ […] my original intention extended no further than to improve our authorised translation of the Greek scriptures; following the text of Griesbach’s excellent edition […] I subjoined a comment to the text of such an important and difficult book. I, therefore, engaged in the second labour of selection and abridgement from a body of notes which I had formed, or compiled, many years ago, with occasional additions suggested by able commentators, or by my own study of the sacred writings.”

One can hence identify the present annotated copy as the result of his effort to provide the English reader with a better translation of the Gospels, through comparison with Greek and Latin sources.