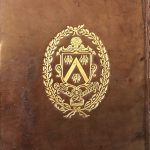 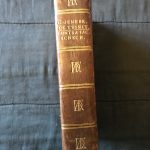 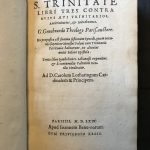 FIRST EDITION. ã8 A-V8 X4 a8 b4 A-2B8, p. [16], 317, [35], 200. Two works in one volume. Italic, Greek, Roman letter, and a little Hebrew. Gracefully decorated initials and head-pieces. Light occasional dump staining of upper margins. In a very well-preserved De Thou calf binding, headcap of spine slightly worn, little worm track at lower corner of upper board. Covers embossed in gilt with the de Thou coat of arms. Modern label on flyleaf: “A choice example of the stately bindings executed for the great bibliophile, J. A. de Thou, before 1587, when he married his first wife, Marie Brabançon, after which event he added her arms on the covers of his books.”; spine with title blocked in gilt and the de Thou monogram in four compartments. Library stamp of the English book collector Richard Heber (1773-1833): “BIBLIOTHECA HEBERIANA”. Excellent condition.

These first editions of two works of Gilbert Génébrard (1537-1597) discuss the nature of the Holy Trinity. Génébrard was a Benedictine monk, “a zealous partisan of the league in France, and a writer for it, but also a learned writer in theology. He studied at Paris, and having acquired a profound knowledge of Hebrew, was a professor of that language at the royal college for thirteen years. He was twice named for the episcopacy, yet never obtained it, and died at last in a sort of confinement at his priory of Semur in Burgundy, in consequence of the violence of his writings against Henry VI. As a polemic as well as a politician, he was a most violent and abusive writer but is said to have been more prudent in his conduct than in his style. St. Francis de Sales gloried in having been his pupil” 1812 Chalmers’ biography (vol.15 p. 398).

Jacques-Auguste de Thou (1553 – 1617) was a prominent French historian and statesman, who collected one of the most important libraries in Europe between fifteenth and sixteenth century. He wrote numerous essays and the ‘Historia SuiTemporis’, an important chronicle of his own times. His legendary library was dispersed soon after his death and its books are sought after for their historical as well as aesthetic value.

Burchill, C. Aristotle and the Trinity: The Case of Johann Hasler in Strasbourg 1574-1575, in “Archiv fur Reformationsgeschichte”, 1988.