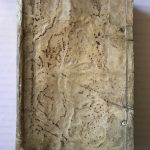 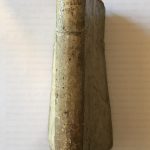 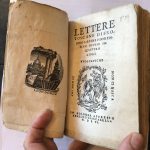 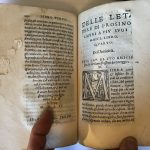 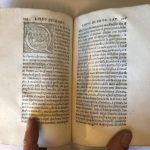 First edition of this work in four volumes of the Florentine humanist Frosino Lapini (1520-71). Besides his main occupation as a priest and educator, Lapini was also a prolific writer for the Medicean Court. Lapini translated a number of Latin and Greek classics into Italian and further wrote about rhetoric, grammatic and education. These ‘Tuscan Letters’ seem to be well-fitting the intellectual profile of the writer, who was driven by a passion for education and teaching philosophy. In regards to topic and style, Lapini’s work is remindful of Giovanni della Casa’s ‘Galateo’ (1558). The dedicatory letter introduces the text as a collection of epistles sent to pupils, which the author decided to publish in order to avoid unauthorised copies. All letters appear to have been written in Florence or Bologna between 1553 and 1556. Through the genre of the ‘familiar letters’, Lapini has the opportunity to illustrate a variety of subjects, stretching from morality, in the first book (“On good and its virtue”, “On virtue”, etc.); to pedagogical commonplaces such as the “Govern of the Prince” (I, pp. 81-104), the “Condition of the Servant” (II, pp. 150-52), the “Strength of Honour” (III, pp. 160-164), “Friendship” (III, from pp. 201-12). Between book III and IV, there is a particularly remarkable section on the use of language and its use (“About holding one’s tongue”, starting at p. 197, and “On language”, from p. 213 onwards).