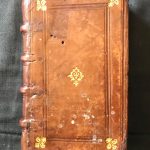 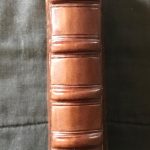 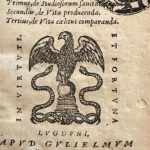 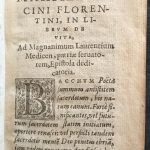 16mo, pp. 461 (iii), a-z A-F8. Three works in one volume. Roman letter, some Italic. Title page with woodcut vignette of an eagle standing on a globe placed on a plinth and sided by two snakes; motto: “in virtute, / et fortuna.” Floriated initials, meanders, head- and tailpieces. Early ms. autograph in capital letters on front cover, twice, and in cursive on t-p: “Laurens Viguier”, probably the same person who left ink underlining and marginalia throughout the book. Stamp of the library of Saint Peter ad Vincula (Rome) on t-p and library shelf-mark label on front pastedown. Some rare marginal spotting and light age browning to page edges. In a fine contemporary blind-ruled calf binding with gilt-tooled fleurons at centre of covers and towards corners; skilfully rebacked. A lovely copy.

‘De vita libri tres’ (Three Books about Life) was written between 1480 and 1489 by Italian philosopher Marsilio Ficino. This famous essay first circulated as a manuscript. After its publication in 1489, the book was regularly reprinted throughout the sixteenth and seventeenth centuries. The first book deals with healthy living; the second is about longevity and the third focuses on astral influences. This work analyses the relationship between the human soul and the body as well as dwelling on the notion of “spiritus”. Taking from classical authors, Ficino considers that certain things are always beneficial to the spirit: wine and aromas, odours, clean air and music.

Ficino’s ‘De vita’ is an amalgam of philosophy, medicine, magic, and astrology. Alongside passages on the immortality of the soul is a miscellany of astrological charts, philosophical digressions, medieval prescriptions; attempts at reconciling the Neoplatonism of Plotinus with Christian Scriptures; magical remedies and talismans. Besides being one of the main philosophers of the Renaissance, Ficino was also the son of a physician and a physician himself. His ‘De vita’ gives an example of medical theory in the Renaissance, which took its tenets from Galen’s theory of the humours and qualities. However, this essay also reflects a new awareness of the role of pagan gods in after the earliest rediscovery of Plato’s dialogues and the ‘Corpus Hermeticum’.