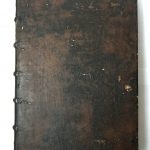 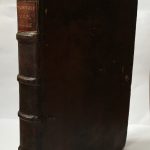 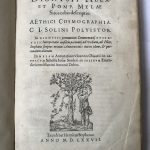 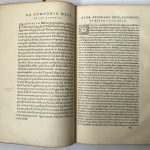 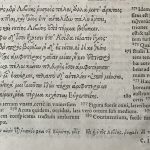 This beautiful edition is a collection of Ancient Greek and Latin texts on geography and cosmography. It includes the famous ethno-geographical description of the world written by the historian Dionysius Periegetes, which was first published by Robert Estienne in 1547, who was the father of Henry, the printer of this edition. This collection includes Pomponius Mela’s De situ orbis, the cosmography of Aethicus Ister, and Gaius Julius Solinus’s Polyistor, which is a description of the curiosities of the world compiled in Late Antiquity. Except for the geographical parts of Pliny’s Historia naturalis, in which Mela is cited as an important authority, the De situ orbis is the only formal treatise on the subject in Classical Latin. This appears here with a commentary by the Spanish humanist Pedro Juan Oliver. The Polyistor is provided with a commentary by the hand of the Jesuit Martin Delrio. The Cosmography, which was issued under the name of Aethicus, its protagonist, is probably the work of a C8th writer, known as Pseudo-Jerome, who was close to the court historiographers of the early Carolingian period. Dionysius Periegetes came from Alexandria and is believed to have written his description at the time of the Roman Emperor Adrian.