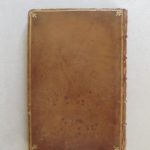 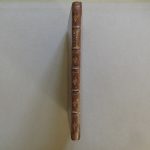 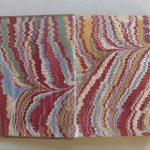 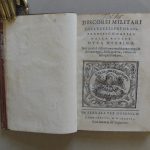 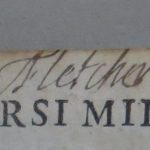 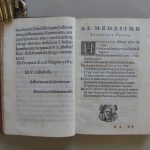 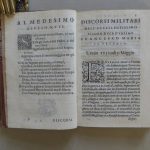 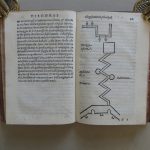 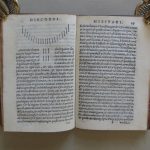 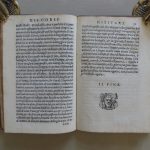 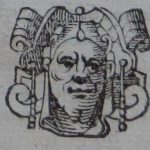 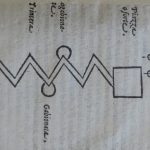 8vo (14.5 x 9.5 cm), 32 numbered leaves: (6), (8), 1 – 32, (6). Text in Italics, except for the opening dedicatory pages. Title-page with printer’s device and handwritten signature of Scottish bibliophile Andrew Fletcher de Saltoun (1653 – 1716) to head of page. Some floriated initials; tail- and end-pieces; two schematic illustrations of battlefields. Bound in seventeenth-century calf, gilt to borders and spine, with minor wear to joints and corners.

This is the first edition of the military memoirs of Francesco Maria I della Rovere (1490 – 1538), Duke of Urbino and one of the great condottieri of the Renaissance. The Duke’s account refers to the years after his exile from the Papal States, when he went under the service of the Venetian Republic as General Governor of the Militias. Under his leadership during the turbulent times of the wars opposing the Empire and the Kingdom of France for the dominion of Northern Italy, Venice secured its independence on the mainland. After returning from the exile, he spent the last years of his reign promoting the arts and combining personal unions between his and other notable families of the Marche. He died in 1538 after being poisoned by a servant through injection of the poison into his ear. It is believed that his death has been an inspiration for Shakespeare’s Hamlet.

This copy comes from the famous library of Andrew Fletcher of Saltoun, a pre-eminent Scottish patriot and writer, who opposed the 1707 Act of Union and supported the failed Darién Scheme aiming to give to Scotland a free-trade port in Panama. Nonetheless, Fletcher was an expert in military tactics and he was commander in chief of the chivalry of the rebel army of the Duke of Monmouth against James II, during the years before the Glorious Revolution. In his treatise ‘A Discourse of Government regarding Militias’ (1698) he stresses the importance of organising local-based, self-governing military units as the best way to ensure a real presence of “well-regulated militias” throughout the land. Della Rovere’s account of the division of his army into smaller units in order to face threats coming from multiple sides might have been a source for Fletcher’s arguments.