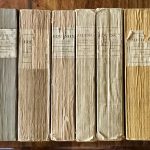 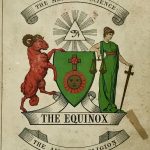 Volume number one of ‘The Equinox’ or the Review of Scientific Illuminism, a series of publications that served as the official organ of the A∴ A∴ (a magical order founded by Aleister Crowley), and it was published twice a year between 1909 and 1913. This is the “Standard” issue, which comprised an edition of 1,000 copies for the early numbers, and about 500 for the later dates. Crowley was the editor and principal author of most of the “The Equinox”, a compilation of esoteric poetry, fiction, and reviews, alongside a number of articles about occultism. This collective work is widely acknowledged as one of the landmarks of occult literature and included numerous colour and black and white illustrations, tables etc.