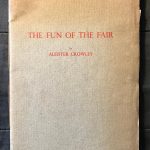 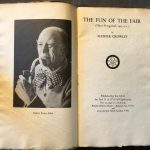 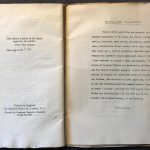 FIRST LIMITED EDITION, no. 169 of 200 copies signed by the author (this copy is unsigned; Crowley only signed half of the edition). 8vo, pp. 24. Original grey wrappers lettered in red. Light marginal toning to covers. Frontispiece portrait of the author by Cambyses Daguerre Churchill. A fine copy, complete with the initial errata slip and the final mimeographed poem “Landed Gentry”.

The Fun of the Fair is Crowley’s vibrant poem describing the Nizhni Novgorod Fair, a famous yearly major trade event held from mid-C16th up to about 1929 in Russia, which attracted merchants from India, Iran and Central Asia. “Crowley ceremoniously published The Fun of the Fair at 11.31 a.m. on 22 December [1942]. One of its first buyers was Ivan Maiskii, Soviet ambassador. The Fun of the Fair’s publication nearly thirty years after composition in 1913 was apparently an attempt to persuade people that the new Russian ally was not going to eat them. Or was it published to persuade others that Crowley was sympathetic towards Russia? The Fun of the Fair had a sting in its tail. Having failed to get Britain’s only communist MP, George Gallagher, to read it in the House, Crowley put his scathing attack on the snobbish hypocrites who obstructed victory at the end of the booklet: ‘The “Landed” Gentry’.” (Churton, p. 399). Only few copies were issued with this poem, which, with its virulent anti-establishment aim was rebuffed by a number of printers. Crowley then hit upon the idea of having a mainstream printer – the Chiswick Press – produce the book, while having a jobbing printer produce “The Landed Gentry”. He then had the poem tipped-in to the back cover of some copies.