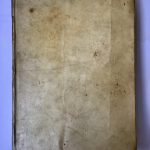 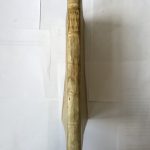 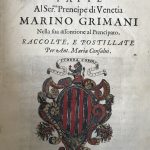 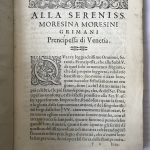 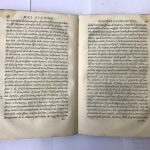 FIRST EDTION. 4to, pp. (12) 171, †4 2†2 A-X4 Y2. Italic letter, a little Roman. Large hand-coloured coat of arms of the Doge Marino Grimani on the title page with the motto “Sydera cordis” (the stars of the heart). Decorated initials, head- and tailpieces. T-p little soiled, marginal dampstaining to the top corners of the initial quires. A single wormhole running throughout most of the book, minimal loss of part of letters. Some modern pencil signs throughout. In contemporary limp vellum, gilt title to spine, hinges are tender and slightly defective. A fine copy.

First and only edition of this collection of Italian vernacular speeches celebrating the election of the patrician Marino Grimani (1532-1605) to the role of Doge, the highest political office in the Republic of Venice. The Most Serene Republic of Venice had been the most powerful mercantile oligarchy on the Adriatic Sea with undisputed hegemony on the trade routes with the Middle, Central and Far East at least until the middle of the C17th. Its dominion over the Adriatic lasted for about a thousand years,  from C8th until the end of C18th, when Napoleon Bonaparte suppressed it and annexed part of it to his Northern Italian dominions.

Antonio Maria Consalvi was a man of letters who flourished between the 16th and 17th centuries. He composed numerous encomiastic works, especially orations and mythological fables. Consalvi had already sung the praises of Grimani on the occasion of the dogal election of 1595 in a work that was also published by Andrea Muschio. This Doge was remembered for his quarrel with the papacy over the latter’s intrusion in the political and spiritual matters of the Republic. He was also remembered for the splendid ceremony he gave in honour of the coronation of his wife, the noblewoman Morosina Morosini, who was officially elected Dogaressa of Venice in 1597 when the present work was published.

Indeed, this work is a further celebration of the ruling couple of ‘La Serenissima’. The dedicatee is Morosina, whom Consalvi calls the “Princess of Venice”. This work includes orations pronounced by several political and ecclesiastical authorities and representatives of the Republic, and of other allies of Venice: Luigi Lana, Ambassador of Brescia; the magistrates Carlo e Nicolò Querini; Francesco Centone, Ambassador of Padua; Giacinto Fornagieri, Ambassador of Rovigo; Ambassador Falconetto, from Chioggia; an homage by the Venetian Monastery of San Zanipolo; Giorgio Piloni, Ambassador of Cividàl di Belluno; the Accademia Veneziana; Mario Frecavalli, Ambassador of Crema; Nicolò Besucio, Ambassador of Bergamo; Nicolò Bolizza, dean of the Law Faculty of the University of Padua; the literate Salustio Lucillo and, finally, the author Antonio Maria Consalvi. The book terminates with two Latin orations by Aderbale Manerbio, Ambassador of Mantua, and the physician Lucio Scarani.