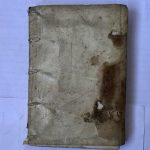 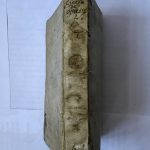 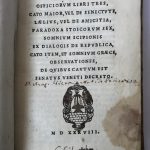 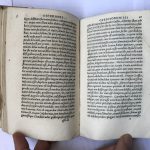 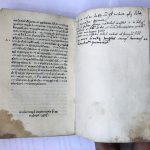 This student’s handbook is a selection of Cicero’s works, among which commented passages from ‘De officiis’, ‘De senectute’, ‘De amicitia’, ‘Paradoxa stoicorum sex’ and ‘De Somnium Scipionis’. A Greek translation of De senectute and the Somnium are found at the end.

‘De officiis’ expounds Cicero’s model of living in society and observe moral obligations. This essay was written in the form of a letter to his son Marcus. ‘De senectute’ is also called ‘Cato Maior’, because it is written in the form of a lecture from the great orator Cato the Elder to Laelius and Scipio Africanus. In ‘De amicitia’, Cicero writes about friendship. Cicero ponders the meaning of friendship by using the relationship between Scipio and Laelius as a model to show his views on this topic. The following work is an attempt to explain six famous Stoic sayings that appear to go against common knowledge. ‘The Dream of Scipio’ is a nightly vision of victory against the Punics set two years before general Scipio oversaw the destruction of Carthage in 146 BC.

This edition also includes an initial letter from the editor, the humanist Paolo Magnolo, to his addressee, the Bishop of Brescia Andrea Cornelio. Furthermore, Magnolo’s “observationes” contain all Cicero’s references to Greek authors, such as Plato, Aristotle and Xenophon. Most of these are based on the excellent earlier Aldine editions on the orator’s works.