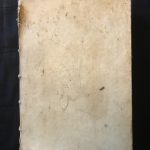 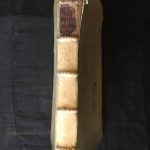 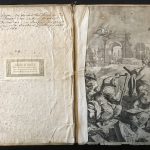 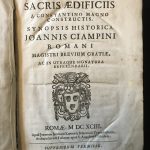 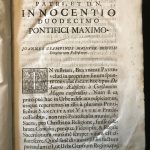 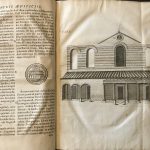 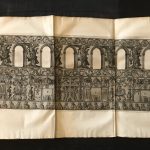 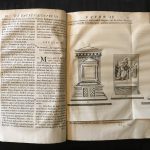 FIRST EDITION. Folio, pp. (16), 217, (3). Roman and Italic letter. Coat of arms of one of the dedicatees, Pope Innocent XII (the other addressee is Cardinal Barberini), on the title page and full-page engraved frontispiece by Arnoldo van Westerhout (1651 – 1725), after Giovanni Battista Leonardi (1660-1703). Head- and tail-pieces and large historiated initials. With 34 plates (0f 35; lacking plate 4), showing maps of churches and religious monuments, views, architectonic details, mosaic decorations and frescos from the monumental buildings established by Constantine the Great, the first Christian Emperor of the Roman Empire. Some tears, mostly negligible but at times affecting the text, to margins of plates no. 3 and 7, 25, 35 (29 and 30 with small worm tracks and holes). Other small tears to leaf B4, C, E2, H, N2, Q3, S, Dd2. Leaf K with outer lower corner torn with loss of a few word endings. Generally very clean and fresh. A few early doodles and sketches throughout and on then front cover. Bound in contemporary vellum over boards, spine in six compartments with raised bands. Spine caps worn and a little defective, cover edges rubbed. Red morocco label with gilt lettering. Bookplate of Helen H. Tanzer and German inscription in ink dated 1863 on front pastedown. Bookseller’s label glued to rear pastedown plus other label certifying the binding was cleaned in 1980. An excellent copy, notwithstanding the missing plate.

This is the first edition of this work, reprinted in 1747 and 1748. The book illustrates the paleo-Christian churches commissioned by Constantine the Great in Rome (e.g., The Lateran, the Vatican, Saint John and Paul and Saint Lawrence), Ravenna, Jerusalem, Constantinople and other important cities of the empire.