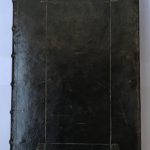 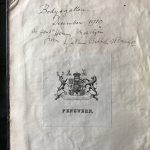 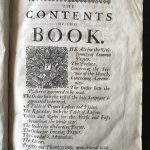 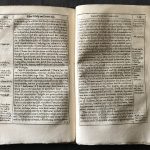 [CHURCH OF ENGLAND], The Book of Common-Prayer, and Administration of the Sacraments, and Other Rites and Ceremonies of the Church, According to the Use of the Church of England, Together with the Psalter or Psalms of David, … And the Form & Manner of Making, Ordaining, & Consecrating of Bishops, Priests and Deacons.

First published in 1549, under Edward VI, the Book of Common Prayer (BPC) was the first book in English to include the complete forms of service for daily and Sunday worship. It contained the Morning Prayer, Evening Prayer, Litany, and Holy Communion. It further included the orders for Baptism, Confirmation, Marriage, “prayers to be said with the sick”, and a funeral service. Readings for the daily prayer were listed in tables as were the Psalms between readings.

In 1604, King James I ordered changes to the liturgy, the most significant of these being the addition of a section on sacraments. Another revision of this text was published in 1662, following the tumultuous events of the English Civil War. The twelfth edition has since remained the official prayer book of the Church of England. In fact, the Act of Uniformity prescribed the form of public prayers of the Church of England according to this same edition. Adherence to the precepts within this book was required to hold any public office. The book also described episcopal ordination for all ministers, i.e. deacons, priests and bishops, which had to be reintroduced after the abolition of many titles by the Puritans.