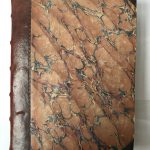 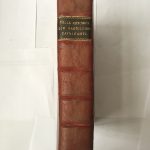 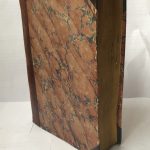 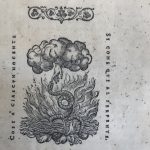 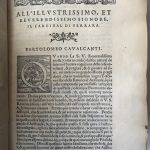 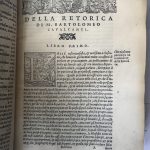 FIRST EDITION. 4to, pp. (xii) 563 (i), +6 A-2L8 2M10. Italic letter, a little Roman. Woodcut printer’s device on title-page. A snake wreathed in a flame biting the index finger of God’s right hand descending from a cloud, with motto “così a ciascun nocente / sì come qui al serpente” that is: “[going against God’s will] may be harmful to anyone [who does so] / in the same way as it is shown here to be harmful to the snake”). Historiated initials, head- and tailpieces. T-p little soiled, text block lightly and evenly yellowed throughout because of long exposure to damp, visible unstained areas to the head of some leaves. Notwithstanding, this copy is clean and crisp. In modern half red morocco, boards covered in marbled paper, gilt label to spine.

This work on rhetoric was first published in the same year by Giolito de’ Ferrari in Venice. Bartolomeo “Baccio” Cavalcanti (1503-62) was a Florentine diplomat, humanist, and philologist, who made acquaintance with Machiavelli during his youth. Baccio fully embraced Machiavelli’s political thought, which was informed by republican ideas of classical origins. A very pragmatical philosophy shaped Baccio’s political views, which appeared frustrated by the troublesome international politics of his age. Invasions, wars, and upheavals tormented the Italian states repeatedly, which were powerless and at the mercy of the great European monarchies.

‘La Retorica’ was Baccio’s most successful work. He started to compose this work during his exile from Florence, while staying between the Estense court of Ferrara and the Studium of Padua. Along with other eminent Florentines, Baccio was forced into exile because of the internal strife of the city between supporters of the republic, on one hand; and the ducal party backing the rule of de’ Medici family, on the other. The writer started this long undertaking in the early 1540s. ‘La Retorica’ is dedicated to his patron, Cardinal Ippolito II d’Este, who strongly advised him to endeavour in a translation of Aristotle’s Rhetoric or to write a new book on rhetoric altogether. Baccio’s choice fell on the latter option, focusing on the debate about whether dialectic and rhetoric could coincide. Angelo Politian already discussed this issue from an aesthetic point of view. Unlike the Venetian scholars of the University of Padua, Baccio Cavalcanti considers rhetoric a crucial ornament of language. All governors and politicians should practice this art, which should be made essentially for the education of those who run the state. Therefore, the classical tradition must be studied by diplomats and official spokesmen, whose main role is to persuade or dissuade from taking action.