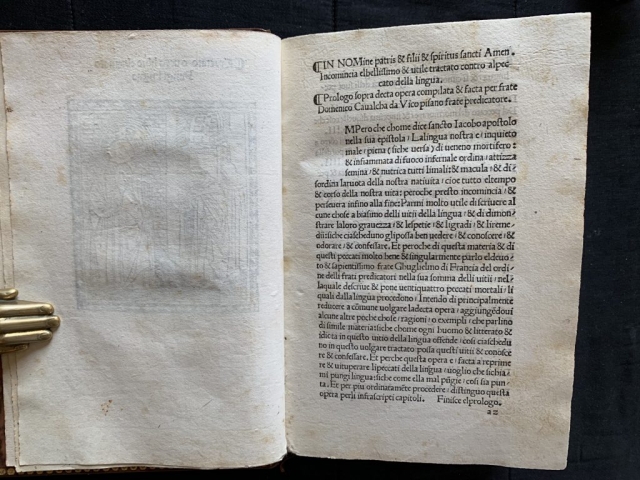 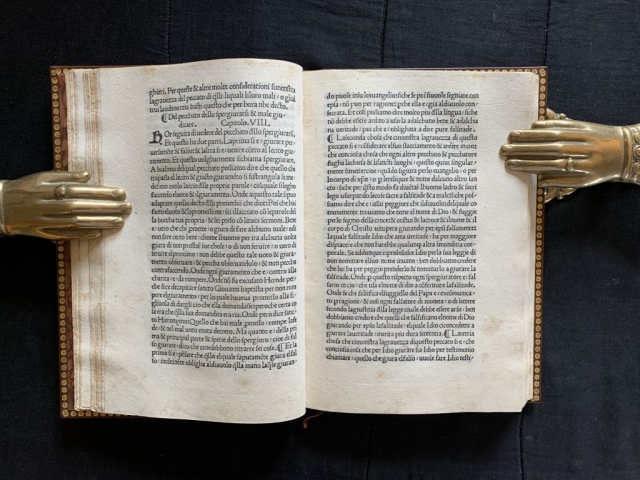 Domenico Cavalca (c. 1270 – 1342) was a Dominican friar and writer. He spent most of his life in the monastery of Santa Caterina in Pisa and he dedicated most of his life caring to the poor and the sick.  In 1342, little before his death, he founded the convent of Santa Marta in Pisa; throughout his life he had dedicated much time to the nunneries in the area around Pisa. His literary works were mostly on religious and ascetic subjects. Cavalca sometimes drew from earlier Latin texts, for example the Summae virtutum ac vitiorum, which was written in the thirteenth century by the French Dominican friar William Perault.

This work is a fourteenth-century treatise in the vernacular on the use of one’s tongue (in both senses, speaking and eating). It was written alongside the Frutti della lingua, on the virtues that come from the good use of the tongue. The Pungi lingua dedicated to the vices that come from the bad use of the tongue, in particular gluttony and the dangers of excessive talking.

The woodcut depicts a friar that can be identified as the author, Domenico Cavalca, surrounded by a group of nuns. This could either refer to his lifelong dedication to the nunneries in the region of Pisa or to the foundation, in 1342, of the convent of Santa Marta.