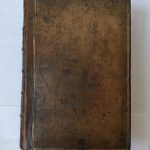 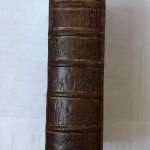 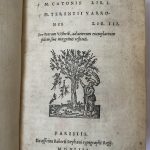 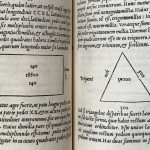 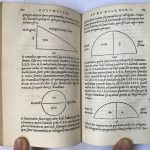 The Florentine humanist Pietro Vettori (1499-1585) edited this collection of agricultural works. Vettori’s introductory letter to Cardinal Marcello Cervini, later Pope Marcello II, though for a very brief period, bears signature “Florence 1541”. This is the first book to be fully printed in italic by Estienne. This use will become a standard in his editions of classics.

The first imprint appearing in this book includes the works of two important authors of ancient Rome. The first author, Cato the Elder, also called “the Censor”, was a senator and historian known for his conservatism and opposition to Hellenization. His manual on farming is a miscellaneous collection of rules of husbandry and management, including sidelights on country life in the 2nd century BC. The second writer, the scholar Varro, is the author of ‘Rerum rusticarum libri tres’ (Three Books on Agriculture), which has been described as “the well-digested system of an experienced and successful farmer who has seen and practised all that he records.” Harrison & Fairfax (1918).

The second imprint includes two works by Columella, who was probably the most prominent writer on agriculture of his time. His ‘Res rustica’ in twelve volumes forms an important source on Roman agriculture, together with the works of Cato and Varro. In manuscripts and early editions of Columella, the short work ‘De arboribus’ (On Trees) is placed as the third book of ‘Res rustica’. However, it is clear from the opening sentences that it is a separate work. The earliest editions of Columella, such as this one, group his works with those of Cato, Varro and Palladius. Some modern library catalogues follow Brunet in listing these under “Rei rusticae scriptores”.