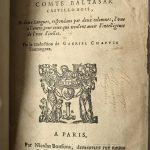 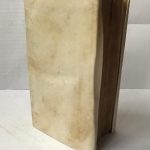 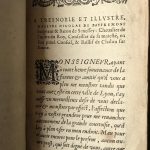 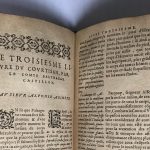 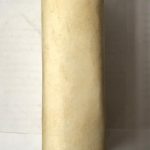 This is an early French translation of the most famous work by Baldassare Castiglione (1478-1529). Castiglione was an Italian diplomat, soldier and author. He was born in Mantua, where he served the Gonzaga family and later moved to Urbino at the service of Guidolbaldo da Montefeltro. In 1506, he went to England in order to receive the Order of the Garter from Henry VII. In 1524, he went to Spain as a papal envoy. He died there in 1529.

Finished in 1518, this book sets forth the author’s ideal of a courtier. Particularly noticeable is the influence that this work had on French culture of the time:

“First published in Italian in 1528, Il Cortegiano was enormously influential throughout Europe. The first French translation, by Jacques Colin, appeared in 1537 at King François I’s request. Another translation, Gabriel Chappuy’s 1585 bilingual edition, testifies to the book’s popularity throughout the sixteenth century. Castiglione’s directives for the conduct of the courtier and his lady-in-waiting apply to the parallel situation of sixteenth-century humanist salons. Despite the obvious class difference, the Poitiers group resembles the Italian court in its makeup – both consist primarily of men – and its social practices, which place special emphasis on speech.” Kendall B. Tarte, Writing Places: Sixteenth-century City Culture and the Des Roches Salon, 2007.