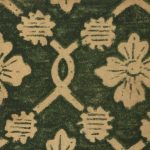 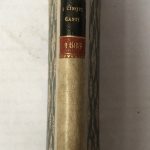 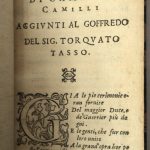 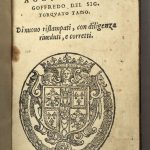 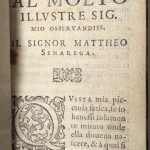 First printed in 1584, this is the second edition of Camillo Camilli’s additional five cantos to ‘Jerusalem Delivered’ (1581), an epic poem by the great poet Torquato Tasso. Camilli (d. 1615) was a scholar from Siena who taught letters in the Republic of Ragusa (now in Croatia). Two years after the publication of the great epic poem by Tasso, he edited a reprint of this work with the title of ‘Goffredo’, to which he added five more cantos in order to conclude the narrative of the love story of Armida and Rinaldo and the one of Arminia and Tancredi.

Camilli’s prefatory letter addresses his dedicatee, Matteo Senarega, who held important offices in the Republic of Genoa, becoming doge in 1591. Senarega studied law in Louvain and Latin in Venice, where Paolo Manuzio was his tutor. Camilli mentions the efforts made by him to prevent further civil wars between members of the old families and the new nobility, whose party had seized the power in the oligarchy. Camilli praises Senarega’s diplomatic skills and tells the reader he learnt from Aldo Manuzio the Younger that the former doge retired to private life, after his successful political manoeuvres. Moreover, Manuzio told Camilli that Senarega enjoys the pleasure of reading poetry, which is the reason why the writer decided to dedicate this work of his to Senarega. Before the first canto begins, Camilli included some celebrative verses dedicated to the great poet Tasso, written by Francesco Melchiori from Oderzo.