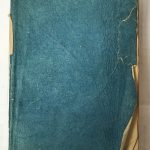 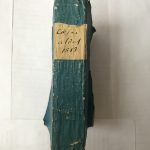 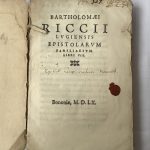 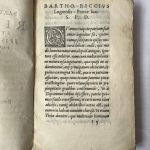 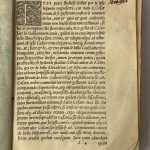 Printed by Gryphius in Lyon, this counterfeit copy includes Caesar’s commentaries edited by the Dominican friar Giovanni Giocondo from Verona (1433-1515), which was first published in Venice by Aldus in 1513. This edition contained Julius Caesar’s extant works. Also included Book VIII of the “Bellum Gallicum”, and the “Bellum Alexandrinum”, both attributed to Caesar’s lieutenant Aulus Hirtius. The volume ends with an “index of people and places” by Raimondo Marliani.

Although admired for their style and read in schools throughout antiquity, Caesar’s ‘Commentarii’ fell into obscurity in the Middle Ages. Caesar’s reports of his military campaigns were rediscovered in the fourteenth and fifteenth centuries. In Italy, Caesar’s writings became the focus of intensive study as the debate between dictatorship and republic became current again. In this context, Caesar stood as the example of the tyrant, whereas Scipio Africanus represented the ‘virtus Romana’ of the Republic.

Caesar’s military genius and political skills were studied well into the sixteenth-century:

“The unadorned style of Caesar’s ‘Commentarii’; the rejection of rhetorical embellishments, which are characteristic of true historia; the notable reduction of evaluative language, all contribute to the apparently objective, impassive tone of Caesar’s narration. Beneath this impassivity, however, modern criticism has discovered tendentious interpretations and distortions of the events for the purpose of political propaganda.” (Conte, “Latin Literature, A History”)