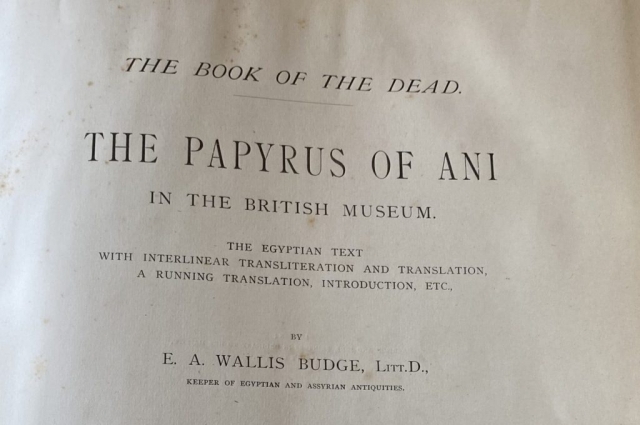 BUDGE, E.A. Wallis. The Book of The Dead. The papyrus of the Ani in the British Museum

Published by the British Museum 1895, London

The Papyrus of Ani is a papyrus scroll manuscript dated to c. 1250 BCE with cursive hieroglyphs and colour illustrations. According to Ancient Egyptian customs an individualised book was compiled for high ranking individuals upon their death, commonly known as the Book of the Dead, which contained spells and declarations that would help in the afterlife. The Papyrus of Ani was compiled for a Theban scribe named Ani. Sir E. A. Wallis Budge discovered the scroll, stole it from an Egyptian government storeroom and sent it to the Principal Librarian of the British Museum.

[envira-gallery id="11586"] CRUIKSHANK, George. A Discovery concerning Ghosts; With a Rap at the “Spirit-Rappers”. Illustrated with cuts. Dedicated to the…