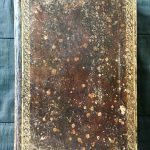 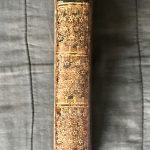 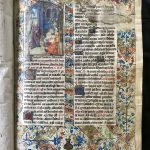 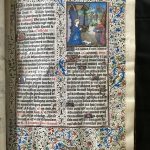 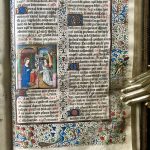 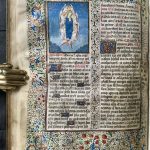 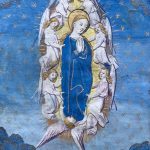 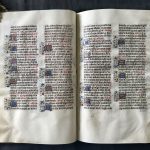 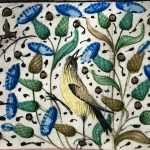 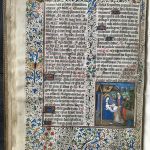 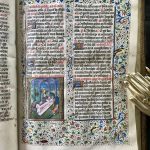 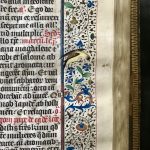 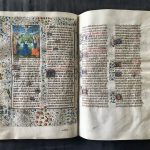 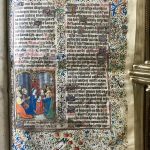 BREVIARY. The Breviary of the Augustinian Abbey of Saint-Loup

4to, 220 x 160 mm. Illuminated ms. on vellum. 152 leaves (plus 3 paper endleaves at front and back), wanting seven gatherings (revealed by catchwords) and slightly misbound (gatherings 8, 9 and 10 misbound); and thus since turn of nineteenth century at least. Collation: i-viii8, ix6, x-xiii8, xiv6, xv-xviii8, xix6, xx4, xxi2. Double column of 33 lines, capitals touched in yellow, rubrics in red. Numerous small initials in burnished gold on blue or pink grounds heightened with white penwork (some enclosing coloured foliage); hairline foliage emerging at edges and terminating in gold leaves and coloured flower-heads. Ten column-wide miniatures (each approximately 60 by 50mm.) accompanied by full decorated borders of stylised foliage and acanthus leaf sprays with gold leaves and bezants enclosing birds and insects. Staining and smudging to fol. 1 and other leaves, occasional flaking of paint else in good condition. Early nineteenth-century brown calf, gilt-tooled with frame of scrolling fern-leaf foliage and profusely gilt spine with title “Cartæ / Extractæ / Breviarii / Sti Lupi”, by Pierre Courteval (of Carmes Street, Paris, where he worked from 1796 to 1836: his printed label pasted to endleaf), with blue wateredsilk pastedowns and doublures. Split to upper joint of binding, spots and rubbed in places.

This fine and sparkling liturgical volume was produced in the late fifteenth century by the Master of Guyout Le Peley for use in the grand Augustinian Abbey of Saint-Loup in Troyes and it is the only manuscript from this important medieval community ever recorded on the open market.  Text: Breviary, with the Temporale opening with the first Sunday of Advent, and ending imperfectly with Gospel readings for the Sundays from Pentecost to Advent running to the twelfth Sunday (fols. 1r-108r); followed by the Sanctorale, opening imperfectly before the feast of St Vincent and ending just after the feast of St Clement (fols.109r-152v). This is most probably the last manuscript codex from this important medieval library which remains in private hands, and thus the only one which could be acquired still. As noted above, the rest of the library seems to have passed directly into institutional ownership, and the vast and comprehensive Schoenberg database records no other manuscript from this library on the open market since records of auction sales began in the seventeenth century.

Illumination: The miniatures are the work of the Master of Guyot Le Peley, named for the Troyes citizen whose commissions, along with those of his family members, would occupy the artist in c. 1475-80 (see F. Avril and N. Reynaud, Les manuscrits à peintures en France, 1995, pp. 186-188). They resemble most closely a miniature added by the artist to a Book of Hours now Paris, S.M.A.F., ms. 79-5 (see also F. Avril et al. Très Riches Heures de Champagne, Paris, 2007, pp.144-145), depicting St Nicholas before the Le Peley family. Particularly distinctive are his very beautiful female faces, with almond-shaped eyes and high-arched brows. The borders, inhabited by birds, are those seen in two versions of Guillaume de Nangis’ Chronique des rois de France (now Paris, BnF, Français 2598 and Baltimore, Walters Art Gallery, W.306).

Provenance: (1) Written and illuminated for use in the Abbey of Saint-Loup, Troyes (with rubric: “Incipit br[e]v[i]ariu[m] s[e]c[un]d[u]m usu[m] ecc[lesia]e et monasterii s[an]cti lupi trecen[sis]”, and with St. Sabianus of Troyes in the Sanctorale). In about 841, the monastery was the custodian of the relics of St Lupus of Troyes, a former bishop of the town who legendarily defended the site against the incursions of Attila the Hun in the fifth century. Later the community was moved inside the town walls for safety, and converted to a monastic community in 1135 by Bernard of Clairvaux. They converted to Augustinian rule soon after and through the efforts of their scriptorium and library came to be one of the most important cultural centres of the region around Troyes. The house was suppressed during the Secularisation at the end of the eighteenth century and the opening of the nineteenth century, and the vast majority of the library of this crucial centre passed directly into municipal ownership, with the vast majority of surviving manuscripts now in the Médiathèque du Grand Troyes. The present manuscript, however, escaped, and perhaps left the community with one of its last members, being carried away by a retiring Augustinian friar. (2) It was presumably in an early and deteriorating binding at the time it left Saint-Loup, and was perhaps rebound for its first secular owner, perhaps of Paris (note named Parisian binding). (3) Maurice Burrus (1882-1959; his MS. 105), with his printed bookplate dated 1937 by “Stern GR”; acquired at auction: GiraudBadin, 3 May 1937, lot 1. Thus, this codex has most probably had only four owners in the last half millennia, and the final three of those in the last century.