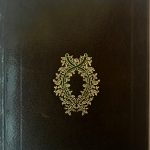 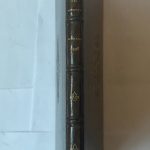 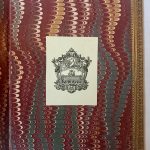 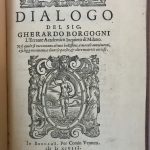 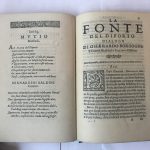 First edition of this fine dialogue written by Gherardo Borgogni (1526 – ca. 1608), which was dedicated to his patron the Count Pirro I Visconti Borromeo as the prefatory letter makes clear. Born in Monferrato, Borgogni was an assiduous traveller during his early life through living in Spain as well as in southern Italy and eventually settling down in Milan. There, he became a member of the Accademia degli Inquieti (Academy of the Restless), in which he entered with the name of “Errante”, the Errand. ‘Fonte del Diporto’ (1598) – which title could be translated as ‘the source of pleasure’, or ‘recreational time’ – is a collection of poems he composed and delivered to his fellow academicians during their meetings. Between the poems, short digressions in prose create unity of meaning. Important figures of the time such as the founder of the academy Muzio Sforza Colonna, the Marquis of Caravaggio, Count Ferdinando Nogarola and the Spanish governor of Milan, Juan Fernandez de Velasco featured as characters of the dialogue, hence showing Borgogni’s acquaintance to an important aristocratic circle. Borgogni established his reputation also through his activity as editor of several poetic works. The present work includes sonnets to the author by Cosmo de Aldana, Gentleman-Usher to Philip II of Spain, and the academy members Francesco Piccinelli, Ercole Cimilotti and Muzio Manfredi.