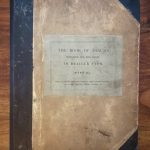 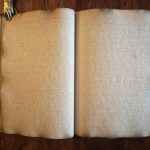 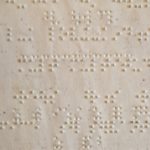 BRITISH AND FOREIGN BIBLE SOCIETY (ed.), The Book of Psalms Embossed for the Blind in Braille Type.

Folio. 1 volume of 2. 78 numbered leaves. Embossed in Braille type, with title-page. Bound in a quartered hardback cover with title printed on a label, rebacked. Internally sound and clean with only occasional ink dotting, maybe as a form of text-marking from a sighted person. Includes three further leaves of a different size with more Braille letters.

The Braille alphabet for blind people was adopted with a considerable delay in English-speaking countries when compared to other countries of continental Europe. Although the advantages of using the Braille system of dots instead of attempting to emboss the Roman letters were clear to those who used it, teachers in the U.K. and the U.S. were afraid that using different letters would isolate the blind students rather than helping them find their position into society. However, it seems that the more obstinate resistance to learning Braille was acted by the sighted teachers themselves, who were not willing to learn a new set of symbols. On the contrary, the blind students were more and more appreciative of the new system. If the production of books with raised letters continued throughout the second half of the 19th century, the Braille alphabet started being learned and used on a daily basis by the students, who openly opposed their schools’ teaching method and taught the new system to each other. In the U.S., Braille became the official alphabet for the blind only in 1918, almost 90 years after its invention.

This edition of the Book of Psalms in English-Braille is a very early one. The only other copy that we were able to locate is kept at the University of Cambridge Library (with shelfmark BSS.110.F35.28a-b).