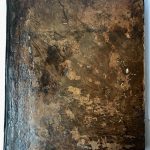 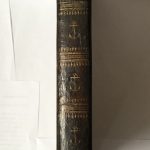 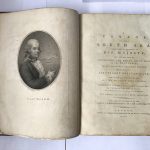 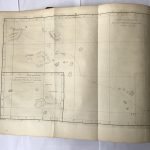 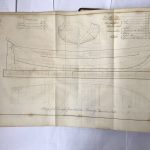 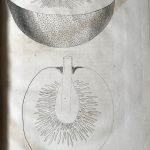 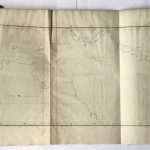 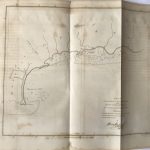 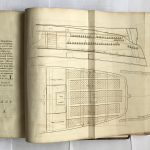 BLIGH, William. A voyage to the South sea, undertaken by command of His Majesty, for the purpose of conveying the bread-fruit tree to the West Indies, in His Majesty’s ship the Bounty, commanded by Lieutenant William Bligh. Including an account of the mutiny on board the said ship, and the subsequent voyage of part of the crew, in the ship’s boat, from Tofoa, one of the Friendly islands, to Timor, a Dutch settlement in the East Indies.

FIRST EDITION. Large 4o. pp. 264. (1), [i], a4 (1) b4c1 (1) c3d-o4 (1) p-x4y2 (1) y2z42a1 (1) 2a32b-2e42f2 (1) 2f22g42h3 (1) 2h12i-2l4. Engraved portrait frontispiece, one plate and 6 engraved maps and charts (5 folding). Browning and soiling to frontispiece and t-p, and generally throughout the book, especially in proximity of the insertions; some damp staining to the plates. T-p’s upper corner torn apart and repaired with new paper. E1 repaired and reinforced to margin on verso; T2 with extensive repaired tear to upper margin towards centre, no text loss. In contemporary mottled calf, rebacked, title to gilt spine in six compartments with anchor emblem, corners and a few abrasions repaired. A complete, good copy in a fine binding.

First edition of this work detailing one of the most remarkable incidents in the whole of British maritime history. Following a request by West Indian merchants to George III, Sir Joseph Banks recommended that the Admiralty fit out the Bounty for a voyage from Tahiti to the West Indies in order to collect breadfruit trees. Banks also recommended Lieutenant Bligh as commander of the voyage on which Fletcher Christian sailed as the Master’s Mate. Reaching Cape Horn in 1787 and encountering fierce headwinds, Bligh retreated across the South Atlantic to round the Cape of Good Hope and sail south to Australia and New Zealand to Tahiti. This is the first official account of the voyage and mutiny, edited from Bligh’s journals by James Burney under the supervision of Sir Joseph Banks while Bligh was on his second breadfruit voyage. The year of publication also marked the court-martial proceedings against fourteen returned mutineers, three of whom were hanged.