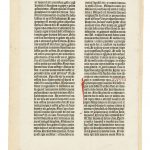 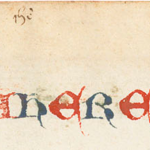 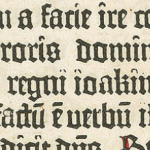 BIBLIA LATINA. A leaf from the Book of Jeremiah.

A remarkably clean, well-margined and rubricated leaf from the 1455 Biblia Latina — the first substantial European book to be printed with movable types and the symbol of the printing revolution. This Bible was produced in the course of five years, from 1450 to 1455, at the workshop of Johann Gutenberg and Johann Fust in Mainz, Germany. Each of the two volumes featured over 300 leaves of text in double column, the majority of which has 42 lines per page. Only 64 copies (several of which fragmentary) have survived out of approximately 158 to 180 originally produced, a quarter of which were probably printed on vellum. These copies all required the addition of initials and book headers by the hands of rubricators. In 1455, the then papal legate, and future Pope Julius II, wrote to the Cardinal Juan de Carvajal that he had seen quires from the Bible exhibited by Gutenberg in Frankfurt: “The script is extremely neat and legible, not at all difficult to follow. Your grace would be able to read it without effort, and indeed without glasses. […] buyers were said to be lined up even before the books were finished”.[1]

The present leaf features a section from the Old Testament of St Jerome’s Vulgate: Jeremiah 25:19 to 27:6, mentioning the Seventy Years of Captivity of the tribe of Judah, Jeremiah being threatened with death and God’s command that the tribe of Judah serve King Nebuchadnezzar of Babylon. The leaf has been identified as vol. II, quire 9 (leaf 3), fol. 83; the Bull’s Head (type I or II) watermark suggests this was a first setting.

This leaf—one of the ‘Noble Fragments’, so named by the book collector A. Edward Newton (1864-1940)—comes from an imperfect copy once in the Mannheim library of Carl Theodor von Pfalz-Sulzbach (1721-94), Electoral Prince of Palatinate and later Bavaria. In 1803, the copy was transferred, with Carl Thedor’s other books, to the Royal Library of Munich. It was thence sold as a duplicate in 1832 and purchased by Robert Curzon, Baron Zouche (1810-73). Next sold at Sotheby’s in 1920, the copy was acquired by Joseph Sabin and, subsequently, by the bookdealer Gabriel Wells. Wells removed the eighteenth-century binding with the gilt Palatine arms and subdivided the copy into smaller fragments or individual leaves. He sold these separately (several with initials replaced in facsimile), the great majority bound in gilt dark blue morocco and accompanied by A. Edward Newton’s bibliographical essay, ‘A Noble Fragment: Being a leaf of the Gutenberg Bible’. Many are now preserved in institutional libraries [2] (see White, Editio Princeps, p. 135). In the past few years, individual leaves, rather than longer excerpts, have been offered for sale. The ‘Noble Fragments’ are the closest a dedicated bibliophile can get to acquiring of this monument of Western printing.