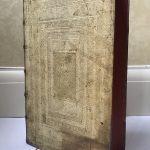 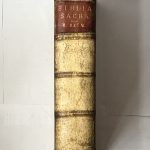 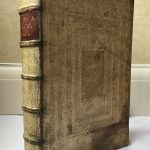 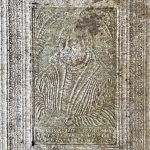 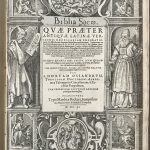 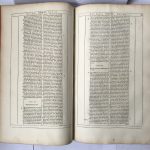 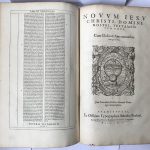 Folio, ff. (vi = title page, portrait and preface), 286 (Old Testament), 110 (Prophets), 101 (New Testament), (xxv = indexes), ):(6 a-4a4 4b6 a-3G4 3H6. Roman and Italic letter. Decorated initials, tailpieces, pages ruled in black, central double-column text, each column with two side narrower rows of gloss and references, diagrams and chronological and genealogical tables. Beautiful title in compartments within portico featuring: Moses and Aaron; the four Evangelists to the corners; Adam, Eve and God in the Garden of Eden, to the top of the page, and the Nativity at the foot. The following leaf, the portrait of Frederick Duke of Württemberg-Teck by Jacob Heyden, is framed by an architectural border with personifications of Justice and Prudence; his coat of arms to the top and declamatory verses at the foot. Very occasional early ink underlining, some light soiling and a few marginal wormholes. In a contemporary German Protestant pigskin binding with original red morocco label and gilt lettering to spine with raised bands. In the centre of the front board, a stamped portrait of Luther with an open book in his hands and underneath the Latin sentence “Nosse cupis faciem Lutheri hanc / cerne tabellam si mentem libr -/ os consule certus eris”, which can loosely be translated as “If you want to know the face of Luther, look at this picture; if his mind, be sure to read his books”. Lower corner of the board a little browned. Compartments with blind-tooled motives and stamped profiles of human figures, perhaps saints, alternating with floral elements and shields, or coat of arms, in a grotesque-like style. Central panel on the rear board somewhat worn, showing the four Evangelists around a floriated cross. Swirling marbled pastedowns. This fine volume is perfect with the exception of the last few leaves with dampstained margins, a.e.r.

Fourth edition of this famous emended and commented version of the Vulgate, which was first published in 1522 with the revision and corrections of Andreas Osiander (1498-1552); today also known as the Osiander bible. A humanist, reformer, and theologian, Osiander embodied the various circles in which many Protestants ran, but also the complicated relationship between those various circles that led to tensions and divisions within the Reformation. A trained humanist, he mastered Greek, Hebrew, and Aramaic, he studied the Jewish Kabbalah and composed a harmony of the Gospels. He also became an early supporter of Luther’s reforms. The present copy not only shows Andreas’s commentary and glosses, but these were also enriched and expanded by his son Lucas the Elder (1534-1604). Lucas was a German pastor of the Evangelical-Lutheran Church in Württemberg and a composer of Lutheran church music.