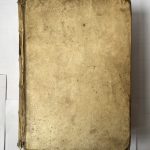 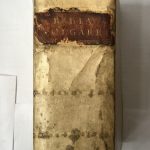 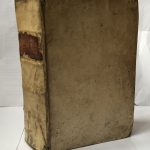 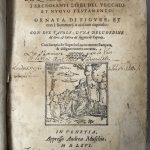 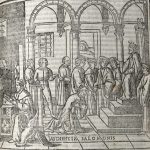 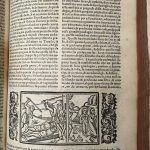 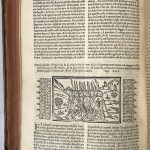 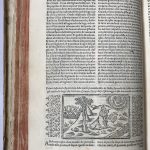 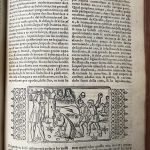 4to, ff. (xxv) 652. Roman letter, some Italic. Historiated initials, numerous charming and unusual woodcuts throughout sided by decorative borders. Title-page detached and laid down on new paper,  showing a woodcut vignette of Saint Gerome penitent with a scribble of a galero (cardinal’s hat). French inscription dated “Londres, 1795” recalling a couplet of Ovid’s Tristia (I, 5, vv. 25-26): “L’or s’éprouve par le feu, et le vrai ami, dans l’adversité”; early note in Italian at foot of t-p: “Tasso è morto nel MDXCV”, with reference to the poet Torquato Tasso’s death. Slightly trimmed, first three quires a little browned, worn, and soiled, as well as the final leaves, several repairs to gathering A (the beginning of Genesis). Some minimal worming towards beginning in centre of page affecting letters; some marginal wormholes through gutters and outer margins towards the end. leaf Aa1 with paper flaw affecting a woodcut and some letters. Bound in 18th-century vellum over boards, fragile joints, lightly rubbed to corners of covers and spine caps, gilt-tooled red morocco label to spine, a.e.r.. A nice copy notwithstanding the faults.

This quarto edition of the Vernacular translation of Saint Jerome’s Vulgate was issued with the approval of the inquisitor Father Adriano, Bishop of Capodistria. The printer, Andrea Muschio tells he felt the need of publishing the Holy Scriptures since too long a time had passed from the latest appearance of this crucial text of Christianity, the most useful to human salvation. The quarto format, he adds, allows one to handily carry it around.

The translation of the sacred texts was carried out by Niccolò Malermi (1422-81). Malermi and his collaborators were the first to translate the Vulgate from Latin into Italian. The text includes the Old and New Testaments and one letter of Saint Paul. The present work is one of the latest 16th-century editions of Malermi’s translation, which appeared in two volumes . The 1490’s Giunta edition was illustrated with 386 woodcuts attributed to an artist known as the Master of the Pico della Mirandola Pliny, after his most famous illuminated manuscript. The illustrations of this edition were re-elaborations of the illuminations, which accompanied the 1490 Giunti edition of the Bible.