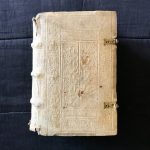 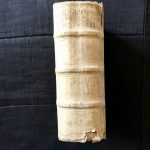 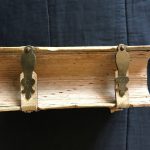 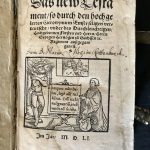 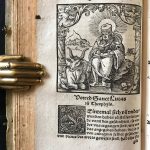 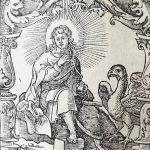 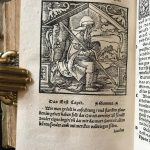 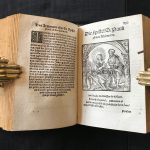 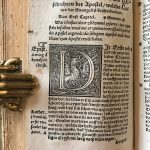 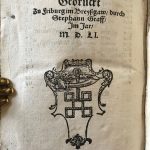 8vo. Gothic text, glosses in Italic. Title-page, ff. 16, 399 (=407), 7; lacking initial blank. Woodcut vignette on title-page and before acknowledgements showing Christ at the Column with the Instruments of the Passion; and the editor Emser kneeling before him, with his coat of arms at his feet. Between Jesus and the theologian, a cartouche with a motto combining two verses from the Book of Psalms (n. 118 and 26): “iniquos odio habui, lege[m] aut[em] tua[m] dilexi. Odi[vi] eccla[siam] malignantium, etcu[m] impiis no[n] sedebo”. Several charming woodcuts by Anton Woensam of Worms: four portraits of the evangelists and others for the epistles. Decorated initials in 3 sizes, the largest ones particularly beautiful. Capital spaces with guide-letters, many printed maniculae and side-notes. Printer’s mark on colophon; without the final blanks, a few marginal repairs in first quire, some waterstains at beginning and light spotting at end. Bound in contemporary blind-stamped pigskin over bevelled wooden boards, later metal clasps, remains of leather tabs. Upper joint split at head, tail of spine slightly defective and some light stains. An excellent and clean copy of this scarce edition.

Born of a prominent Ulm family, Hieronymus Emser (1478-1527) was the most ardent literary opponent of Luther’s “pestilential heresy”, as Protestantism is defined in the introduction to this volume. The controversy between Emser and Luther exploded in 1519, after Luther’s dramatic defense of the reformed ideas at the theological debate that took place in Leipzig the same year. With unprecedented acrimony, the two theologians attacked each other for many years in public as well as in print. On many occasions, Luther referred to Emser as the ‘Leipzig Goat’ (from Emser’s coat of arm, pretentiously exhibited in all his publications, including this one); to which his opponent replied by addressing Luther as the ‘Wittenberg Bull’. In order to counter the fast-spreading success of Luther’s vernacular Bible, the Catholic Duke of Saxony, George ‘The Bearded’, encouraged the theologian Emser to undertake this translation of the New Testament into German. Emser compared Luther’s ‘September Testament’ (1522), which was his first translation of the Gospels from Greek, with the Reformer’s 1527 translation of the whole Bible in order to prove his inconsistencies. The present book is a rare edition of Emser’s work, which was first published in 1527.

The beautiful woodcuts contained in this book are the work of Anton Woensam, a painter and graphic artist from Worms specialising in Biblical scenes. Forty-five paintings and over 500 woodcuts are attributed to him. However, his most notable achievement is an enlarged view of the city of Köln from the River Rhine, where he showed his remarkable skills. Woesam’s woodcuts depict the four Evangelists (cf. Merlo 1016, 338-341) the suffering Saviour, worshipped by the priest Emser (cf. Merlo 1014, 330), and the authors of the Apostolic Letters.

The decoration of the binding equally displays remarkable tooling. The central panel of front and rear covers is divided in four smaller compartments by double-fillet rulings, whereas the outer borders are beautifully decorated with medallions featuring four different profiles of Roman emperors. Contemporary tabs divide the textblock in smaller sections for an easy consultation. This copy has been held at the Library of the Church of the Birth of Mary of Rottenbuch (Bavaria), as inscribed on the title-page; and it was later purchased by Otto Schäfer for his library in Schweinfurt.

DENTAL BOARD OF THE UK

TAULER [with] ECKHART [with] [RULMAN]