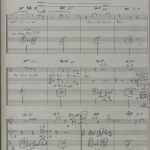 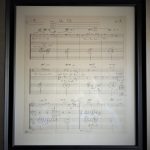 One page, 12-stave paper, framed and glazed, overall size 38.2 x 32.5 cm. in frame. With autograph notes by the scriptwriter Wolf Mankowitz affixed to the back of the frame explaining his connection with the film in 1965–1966 (‘. . . It was a lunatic waste of talent and money and did no-one any good . . .’) and that this manuscript page was given to him by the composers [1965–1966]. A sketch written in pencil on three systems, each of four staves, with Hal David’s lyrics (‘ . . . Have no fear Bond is Here/He’s Gonna save the world’), headed ‘Main Title/Page 4’. 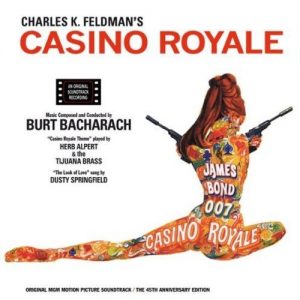 The spoof film adaptation of Ian Fleming’s ‘Casino Royale’, with David Niven as the retired Sir James Bond and Peter Sellers, Woody Allen and Orson Welles playing a host of other characters, has generally provoked the kind of critical reaction suggested by the scriptwriter himself. Its most memorable and most lasting feature is certainly the well-known musical theme, partly scored for Herb Alpers and the Tijuana Brass and here represented by a page of the composers’ original sketch presented to British playwright Wolf Mankowitz.

The title track of Casino Royale went into the Top 40 as a single and was later released in the official soundtrack of the movie. The album is widely considered to be one of the best-engineered vinyl press of all time and is very much sought after by collectors. Dynamics and notations by Bacharach are clearly visible and offer an insight into a veritable genius’ mind.