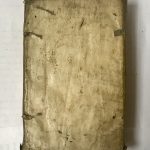 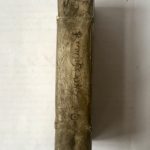 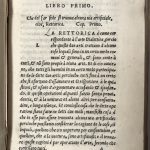 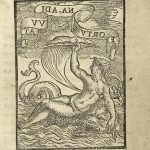 Felice Figliucci (1518-1595) was an Italian philosopher and theologian. He was born in Siena and studied Philosophy at the University of Padua. After discovering the works of authors such as Pico and Ficino, he decided to devote a considerable part of his carrier to editing Ficino’s works, while in the service of Cardinal Ciocchi Del Monte, who later became pope Julius III.

Figliucci was a promoter of the use of vernacular as a better way to spread culture, considering it of no lesser value than Latin. Therefore, he translated many classics into vernacular as in the case of the present work. He attended the Council of Trent, after this was moved to Bologna in 1547. During this time, he had the opportunity of visiting Padua frequently and work on this translation, which was presented to his patron on the following year.

Bibliography: Only 5 copies known in the UK, according to COPAC (BL and UCL, in London; Manchester and Oxford universities, and one copy with the National trust)