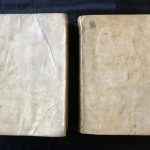 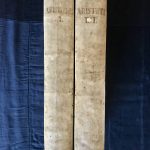 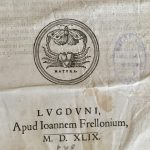 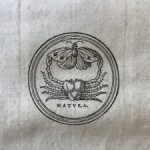 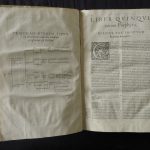 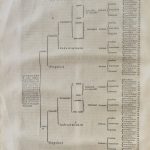 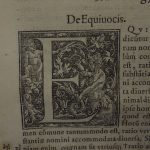 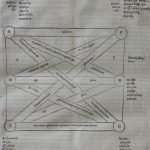 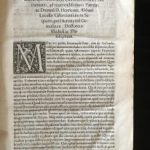 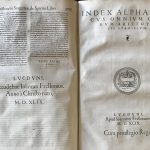 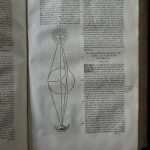 Folio. 2 vols. Roman letter, little Italic, sporadic Greek. Double-column text; numerous fine, large and small woodcut initials, beautiful woodcut printer’s devices repeated on both title-pages and before the index at the end of the first volume. Includes several diagrams, synoptic tables and illustrative woodcuts within the text and as side notes to margin. A few early marginalia commenting the section of Aristotle’s Poetics (II, Rr6 and Rr7). Generally clean and crisp, very occasional browning (more marked at beginning of I, a), light ink spotting throughout and a few negligible burns (a hole – 0,5 × 1 mm – affecting the text on I, C8). Slightly waterstained to title of first volume around a faded library stamp of the Convent of St. Dominic (Dominican Library of Lyon); some other stamps of different types used by the same library and library numbers impressed on title-pages and colophons, where also a large printer’s explicit with imprint details appears. Short tear to central part of outer blank margin of II, Zz6 and a few marginal worm holes and tracks to upper corner and head of final gatherings of second volume, not affecting the text. Bound in near-contemporary vellum over paste-boards, library stamps and various labels on upper endpaper. Pastedowns cut along inner margins of vellum and re-glued to the boards. A very good copy of this mid-sixteenth century Lyonnaise edition of Aristotle’s works.

Throughout the sixteenth century, the Lyonnaise workshop of Jean and François Frellon was praised for the high quality of their editions as well as for the clarity and beauty of their types. After completing his apprenticeship with Conrad Roesch in Bâle, Jean moved with his brother to Lyon, where he became acquainted with the local Reformers and actively promoted the circulation of their books. A partisan for a new humanist approach to textual criticism, he was a friend to Michel Servet and Jean Calvin, who both published and edited many books with the Frellon brothers. Completed after the death of François, Jean’s 1549 edition of the Opera Omnia of Aristotle is in many ways his masterpiece for the complexity of the critical apparatus and the beauty and clarity of the design. Besides the workshop’s customary decoration, some extraordinary diagrams were specially designed for this folio edition suggesting extreme care in making the Aristotelian text more accessible and memorable. The critical apparatus is remarkable as well. Each work is introduced by commentaries from some of the most authoritative scholars of the time and from antiquity, including Porphiry, Juan Luis Vives, Melanchton, Petrus Ramus and Angelo Poliziano.

ADAMS A1744. We could locate only three copies in British collections: the university libraries of Oxford, Cambridge and Durham. Not in BM STC French C16th and not on the online catalogue of the British Library.