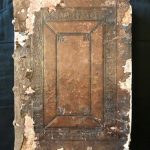 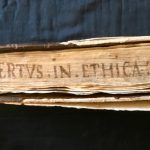 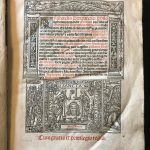 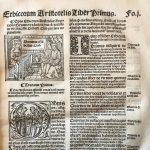 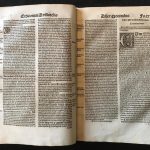 Folio. a6 aa4 b-z6 A-B6 C8. Gothic letter, double column. Extensive title in red and black within decorated woodcut border in the guise of a classic portico. Woodcut printer’s device showing Saints Peter and Paul with their emblems, holding the Holy Shroud with Christ’s face (the “Vera Icon”) and inscribed with the motto “Salva Sancta Facies” (the title of Saint Veronica’s prayer, which became popular during the 15th century); on the sides, illustrations of Juda’s kiss and Christ carrying the cross. Some attractive woodcut illustrations and initials in different sizes. Internally clean, slight browning and marginal waterstaining. Registrum partially scratched, which is incidentally repeated at the end of the table of contents. Some early Latin annotation in a neat hand. Bound in contemporary French calf, blind tooled, re-backed; substantial loss to spine, joints and extremities, contem. title inked to fore-edge as “Gilbertus in Ethica”, sewing guards with 15th-century ms waste. Remains of azzurre silk ties.

This is a rare and fine edition of Aristotle’s Nicomachean Ethics translated into Latin by the Byzantine scholar Johannes Argyropulus for the Lord of Florence, Cosimo de’ Medici, who was one of the greatest patrons of arts and letters of his time. The text is here provided with the commentary of the Parisian theologian Gilbert Crab, who is shown in the act of addressing his pupils in one of the woodcuts at the beginning of the text.

This edition is very rare. According to USTC, only 3 copies can be located around the world: in Aberdeen, Munich and Paris. WorldCat lists only three other copies: in Freiburg, Stockholm and Seville. Not in Adams nor BMC.