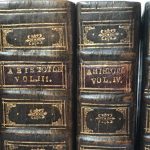 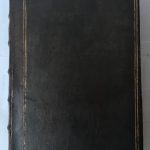 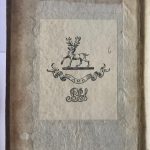 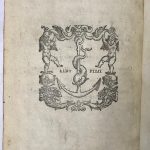 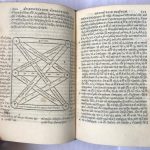 8vo. 6 volumes, all lacking initial leaf (i.e. title pages). Greek type, a little Roman. Decorated initials, large woodcut diagram on p. 122 of vol. 1, occasional early marginalia and underlining. Printer’s device on each t-p (here unfortunately wanting, as stated above) and also at end of each volume, except for vol. 3, which is complete without the final Aldine anchor. Light age yellowing to margins and occasional waterstaining. In early calf binding over boards with gilt ruled double fillet. Skilfully rebacked, perfectly blending in with the covers. Gilt spine in compartments with author’s name and volume numbers on red morocco labels. Bookplate showing the crest of the Clan Scott on pastedowns. A clean, fresh copy, unfortunately slightly incomplete.

This excellent and rare Aldine collection of Aristotle’s works printed in a handy 8vo format was the result of the erudite philological work of Federico Torresano. The brother of Giovanni Francesco and Maria, who married Aldo Manuzio the Elder, the “prince” of the Renaissance printers, Federico was son to Andrea Torresano the Elder, who trained in Nicolas Jenson’s workshop and then became Aldo’s first partner in business, together with Francesco Barbarigo. Federico was a learned editor of Ancient Greek and Latin authors and a successful printer active in Venice between 1538 and 1561. He married Paola, sister to Aldo. Besides editing several publications of classics, he took part in a printing enterprise called the Company of the Crown, which was devoted to the edition of law books, in association with other major families of printers active in Venice at the time, such as Gunti, Scoto, and Giolito de Ferrari. Adams, I, 1733; Goldsmid, p. 48: “a very valuable edition, rarely found complete”.