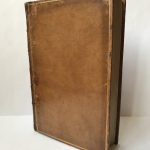 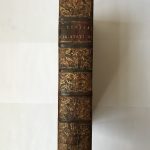 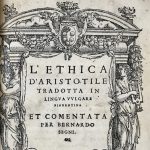 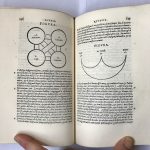 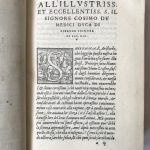 Bernardo Segni (1504-58) was born to an old and wealthy family of Florentine merchants. He studied letters and law at the University of Padua and he then entered in the service of the duke of Florence Cosimo I de Medici, carrying out a number of diplomatic postings in Europe. He was an ambassador at the court of the Holy Roman Emperor Ferdinand I. He translated into vernacular Sophocles’s Oedipus, Aristotle’s Poetics and Politics (Florence 1549), and the present book, which is the Nicomachean Ethics of the great Greek philosopher, published in 1550. This is the first Segni edition, the first “full vernacular interpretation of Aristotle, including both translation and chapter-by-chapter commentary” (Lines, “Rethinking Renaissance Aristotelianism”, in Renaissance Quarterly, 66.3, Fall 2013, p. 838). “Practically unstudied, Segni’s work represents an important moment in the evolution of vernacular Aristotelianism (and philosophy more generally) in the Renaissance’ (idem, p. 824). However, the humanist Segni is best known as a historian. He wrote ‘Istorie fiorentine’ (1527-1555) in fifteen books and ‘Vita de Niccolo Capponi’, who was his uncle. In his introduction to the Ethics, Segni exalts the Tuscan language and underlines the need for vernacular editions of Greek and Latin texts; he quotes frequently from Dante throughout his commentary. He also draws extensively on the earlier commentary tradition, including the works of Byzantine scholar Eustratius (c.1050-1121), English scholastic philosopher Walter Burley (c.1275-1344/45) and the fifteenth-century Florentine erudite, Donato Acciaiuoli (1429-1478). Written at the height of the Counter-Reformation, during the Council of Trent, another notable feature of Segni’s interpretation is the frequent reference to Catholic doctrine, at the implied expense of Lutheran teachings. The first vernacular edition of the Nicomachean Ethics was a French translation by Nicolas Oresme, printed in 1488.