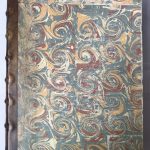 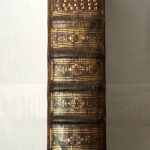 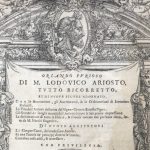 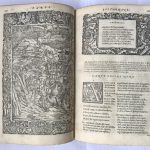 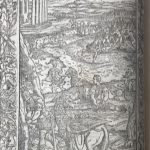 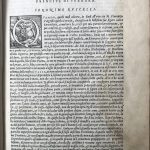 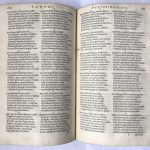 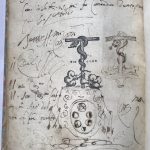 4to, two parts in one volume, pp. (xvi) 654 (xxxiv), +8A-Z a-u8. Italic letter, some Roman. Text in double column, explanatory prose. Slightly trimmed. Title within an elaborate architectural border with caryatids, masks, grotesques, and angels; imposing timber surmounted by a rich frieze with the profile of the author in apotheosis (“Divino Ludovido Ariosto” inscribed), fashioned as a laureate poet. “The portrait is a reverse copy of the Giolito medallion portrait introduced in 1542. The model for these laureate portraits is the profile by Titian” (Mortimer). Small wormhole through centre of t-p and subsequent leaf, no text loss. Friezes with snakes on both caryatids’ plinths with mottos “pro bono malum”, to the left, and “dilexisti malitiam super benignitatem”, to the right. Printer’s device showing the brazen snake held by two hands and the word “VINCENT” – a pun with the printer’s name, Vincenzo. Imprint in cartouche on lower border. On t-p, Valgrisi’s device appears on an armorial shield supported by putti, motto inscribed on border: “ita exaltari oportet filium hominis / sicut Moyses exaltavit serpentem in deserto” (as the son of man [Jesus] must be glorified, so Moses exalted the snake in the desert). Large decorated and historiated initials throughout; beautiful full-page woodcut illustrations for each canto within magnificent borders; descriptive sonnets within superior frames at the start of each poem. Lightly soiled throughout, occasional marginal dampstaining, spotting, and thumb marks. Early ink scribbles, annotations and sketches on the two final leaves, de’ Medici coat of arms drawn on verso of last page with some intentional burns in correspondence with three out of the six spheres on the armorial; one burn piercing through the three final leaves. Library bookplate of Edith Mary Webb (“26 Abingdon Villas, Kensington”). In modern quarter calf, marbles paper over thick boards, gilt spine with title and author on red morocco label. A fine copy of this remarkable edition of Ariosto’s masterpiece.

This is a reissue of the Valgrisi edition (first published in 1556) of one of the most important and influential of the illustrated editions of Ariosto of the C16th, with notes and explanations by Girolamo Ruscelli. The full-page illustrations were copied and reprinted in many editions throughout the C16th. For each canto, an utterly detailed visual description of the content is provided to the reader, which is reinforced by the opening excerpts in verses: “Valgrisi’s blocks are the first full-page illustrations for Ariosto. He went one step further than Giolito as he had done in his 1552 Boccaccio in an attempt to compete with the Giolito editions. [… In] the dedication to Alfonso d’Este, Ruscelli explains to the reader the application of the rules of perspective to the multiple scenes in these cuts. The upper part of the block often becomes a map, offering, as Philip Hofer notes, ‘a tour of the canto by hippogryph'”. (Mortimer It. vol 1, 29).

The great Italian poet Lodovico Ariosto (1474-1533) was on diplomatic and military service before retiring to Ferrara, where he was the director of the Este theatre. He was the author of odes, Latin poems, satires, sonnets, and comedies. He first published this work in 1516, which was revised in two further editions, the last of which was in 1532. Orlando Furioso became one of the most influential works in Western literature and heavily influenced Spenser’s ‘The Fairie Queene’, which in turn was probably a source for one of the plots in Shakespeare’s Much Ado About Nothing (Hero/Claudio/Don John). The work was also an influence on Lope de Vega in Spain and Jean de la Fontaine in France.