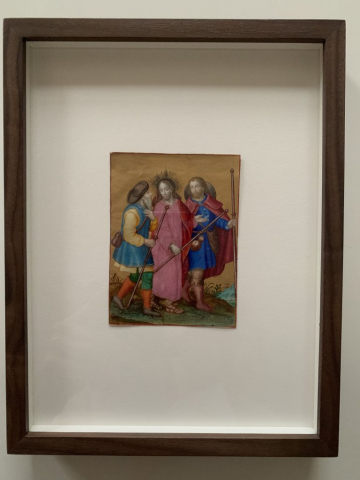 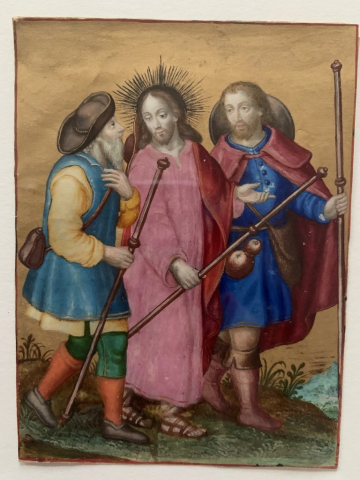 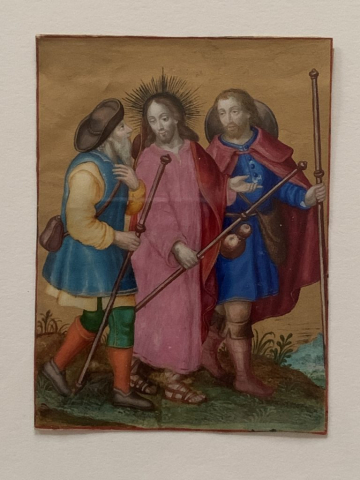 ANONYMOUS DUTCH ARTIST. Christ and the Disciples on the Way to Emmaus.

This exquisite and finely painted miniature depicts Christ and the Disciples on the way to Emmaus. Christ is represented deep in conversation with the Disciples – as evidenced by the variety of gestures of all three men – as they traverse a verdant landscape. The men are wearing brightly coloured garments: Christ is wearing his characteristic pink robe topped by a gold-bordered vermillion mantle loosely draped on his left shoulder; the white bearded figure on the left of Christ is wearing yellow, light blue and orange garments, while the figure on the right is clothed in an ultramarine robe paired with a contrasting red mantle that echoes Christ’s robes.

The Disciples are depicted in the guise of Renaissance pilgrims as evidenced by the costumes they are wearing, including broad-brimmed hats to protect from the elements, comfortable walking shoes and carrying shoulder bags and a water flask. On top of this, they are also holding the typical walking stick so often associated with pilgrims and travellers.  Christ too, is shown with a hat loosely hanging on his back and carrying the same knotted walking stick as the Disciples.

Overall, the illumination is characterised not only by a very refined style and close attention to detail, but also by an exceptional use of colour. This all denotes the fact that the miniature was almost certainly produced for a wealthy patron, perhaps for a lavishly illustrated book. Furthermore, the use of vellum and the abundance of bright pigments, especially the presence of the ultramarine blue and the liberal amount of gold for the background, also point in this direction. 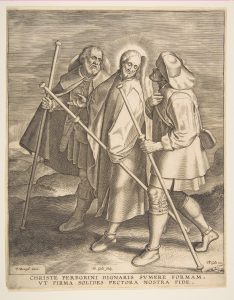 The illumination is a reversed version of a 1571 signed and dated print by Philips Galle (1537-1612). Galle, who often worked in collaboration with Jerome Cock, was a Dutch publisher who is best known today for publishing old master prints, especially Bruegel, for which he also was a designer and engraver. According to Galle, and as testified by the inscription on the print itself (“P. Bruegel inventor”), the artist responsible for this composition is the acclaimed Dutch artist Pieter Bruegel the Elder (c. 1525–1530 – 9 September 1569).

This print is dated two years after the death of Bruegel the Elder and scholars are still unsure which of his artworks was used by Galle as model. Some scholars believe that the subject might have been taken from a larger Bruegel the Younger painting inspired by an original work by his father, Bruegel the Elder.  Others have put forward a possible relationship with the three female figures from the 1565 painting The Hay Harvest, today in the Lobkowicz Palace in Prague Castle. However, these figures do not seem similar enough to have been used as models. It is therefore still hard to determine exactly how and to what extent to interpret the inscription by Galle that attributed the invention of the composition to Bruegel himself.

The journey to Emmaus is recounted in the Gospel of Luke, 24:13–35. The appearance of Christ on the road to Emmaus is one of the earliest after his crucifixion and the discovery of the empty sepulchre. Two disciples, who were discussing Christ and his teachings, were walking on a road heading to Emmaus when they were met by Christ himself, whom they did not recognise and instead mistook for a stranger. They shared with Christ their fears and anxieties; and Christ listened to them and comforted them by guiding them through the Sacred Scriptures. After the encounter on the road Christ joined the two disciples for supper, where he was eventually recognised.

The encounter on the road to Emmaus and the ensuing supper have both often been depicted in Medieval and Renaissance art, although the supper has received more attention and is more often depicted, with particular attention to the moment just before Christ is being recognised. Famous examples of this episode in Medieval and Renaissance art include the works by Rembrandt and Caravaggio.