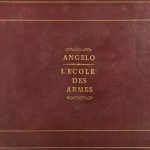 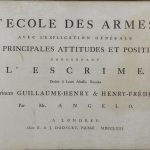 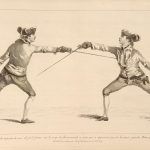 FIRST EDITION. Oblong folio, 5 preliminary leaves: title, dedication, preface, list of subscribers (these leaves individually lettered a–e); followed by 47 b/w engraved plates, mixed in with unnumbered but individually lettered leaves of instructions (the first lettered f; thereafter A–Fff, i.e., without the j’s, u’s and w’s as per standard printing style. In total 1 plus 52 leaves); followed by 2 leaves of table and errata. Title-page slightly dusty with a small flaw in a blank portion, occasional further light spotting; two mends, one to a tear in a blank portion, the other replacing an outer corner (blank). An excellent copy, bound in modern gilt-ruled full red morocco, title in gilt on upper cover, spine gilt.

FIRST EDITION of a comprehensive manual on the art of fencing, dedicated to the princes William Henry and Henry Frederick. Fencing was an indispensable part of a gentleman’s education, which Englishmen seem usually to have learned abroad until 1755, when Angelo came to London in the company of the celebrated beauty Peg Woffington. Early in his time in the country, Angelo scored impressive victories in public matches against English and Irish social fencers. His ensuing fame gained him key clients at court and in the royal family (amongst the first were the Duke of Devonshire and the Prince of Wales). Angelo and his descendants went on to train generations of wealthy English youth in fencing and horsemanship.

The ‘Ecole des Armes’, which was often reprinted, presents the classical foil fencing of the French school. The 47 illustrations were drawn from life by John Gwynn, a founding member of the Royal Academy, with Angelo posing as the main figure. Angelo’s work was selected as the chapter on ‘Escrime’ in the ‘Encyclopédie’ of Diderot and d’Alembert.