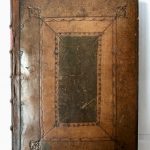 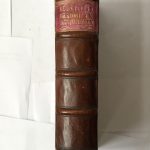 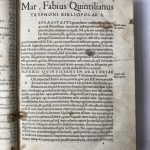 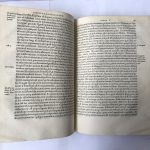 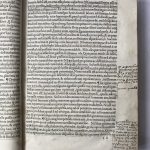 4to, ff. (iv) 228 LXVI, A4 a-z8 A-E8 F4 2A-2G8 2H4 2I6. Roman letter, some Italic, a little Greek and Hebrew. Printer’s device on t-p, capital spaces with small guide-letters. All annotated and underlined in ink throughout by different early hands, at least three; the thirteenth declamation (Apes Pauperis) recently annotated with light pencil marginalia. Some water staining and oxidation, especially on the initial two gatherings; Dampstain on lower margins to gutter of the last two quires, occasional soiling and spotting. Early autograph of “John Herbert” (perhaps the English Secretary of State (fl. 1550-1617) ?). Bookplate of Sir Charles Mordaunt (1836-1897) on front pastedown. Rebacked, in a C18th panelled calf binding, gilt dentelles and title to spine on red label. A good copy.

This is a scarce edition of the ‘Institutes of Oratory’ by the Spanish-born Roman rhetorician Quintilian (ca. 35-100 AD), one of the most renowned and popular authors about the theory and practice of rhetoric. This work had an incredible influence on Western political thought and speech-writing. In Rome, Quintilian met with great success as a teacher and he was the first professional orator to be able to set up a public school, whilst receiving a salary from the State. He continued to teach for twenty years and had the younger Pliny and the two nephews of Domitian among his pupils. Though his writing is often difficult because of his epigrammatic style, he successfully avoided being affected or extravagant. Despite the fact that much of it is highly technical, the ‘Institutio Oratoria’ has still much that is of interest to‑day. In the first book, his precepts regarding the education of the youth have lasted for centuries.