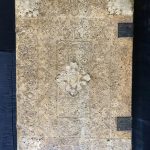 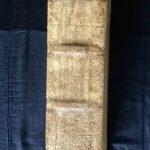 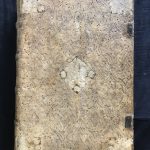 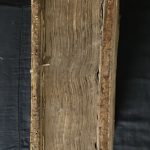 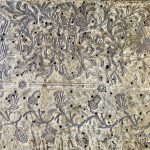 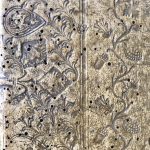 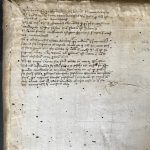 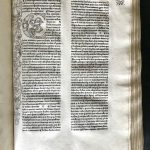 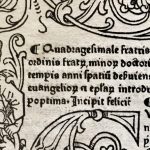 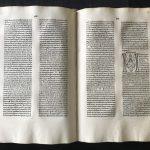 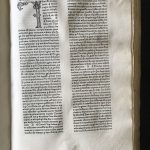 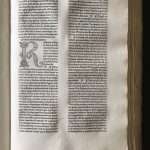 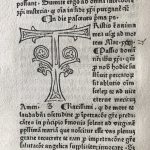 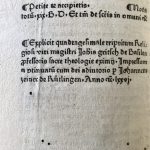 Royal folio (405 x 275mm). 269 leaves (of 271, without blanks). Gothic letters, double-column text of 50 lines. Exquisite and extremely rare decorative woodcut border on the first leaf of text, very uncommon in printed version as this sort of foliation in early printed books was usually illuminated or rubricated by hand. Numerous fine and sumptuous 10-line printed initials at the beginning of each sermon. Smaller 3-line initials in the last section of the book. The opening border as well as the decorative printed initials have not been coloured, as was customary for other copies of the same work. Manuscript corrections to the misnumbering of the early numerical quiring printed in the centre at the head of the leaves. A few marginalia throughout. Early inscription at the top left corner of the upper pastedown regarding the influence of the moon over sea levels; and the unfortunate conjunction of Jupiter and Mars according to Albertus Magnus (see, Philosophia Pauperum, XXV). Early handwritten title in ink to the fore edge. Watermarks featuring a bull’s head and a flower clearly visible on both pastedowns (cf. Briquet 14871-5). Some very small wormholes evenly scattered on first and final leaves, not affecting the text, and negligible soiling and thumb marks on page margins. Bound in contemporary Landshut blind-stamped pigskin over thick wooden boards [EBDB w000032]. Front cover magnificently decorated with tools showing deer, dragons, rampant lions and floral motifs on four concentric panels divided by double-fillet ruling. Minor loss of leather to foot and lower edge. Rear cover with a different floral decorative pattern. Spine in five compartments with four raised bands covering thick double sowing supports. Catches, metal centre- and corner-pieces have been removed, whilst the original clasps are still present. Despite the loss of most metal embellishments, the binding is remarkably well-preserved and the rich tool work is in near perfect condition. Faded name of the author inscribed on centre of front cover. This copy is incredibly fresh, clean, still crisp, and considerably wide-margined.

This popular collection of sermons in Latin was written by the Franciscan preacher Konrad [Conradus] Gritsch between 1440 and 1444. However, his book was published under the illustrious name of his brother, Johann [Johannes] (1409 – 1475), a famous preacher from Basel, who distinguished himself for his knowledge of canon law, natural science and exegesis.

This is the third of twenty-four incunabular editions of this work, the second published by Johann Zainer from Ulm. Compared to Zainer’s first edition, there are very few changes to the text or in the general outlook of the book. Gritsch’s sermons were meant to guide the faithful through fasting and meditations of Lent, providing them with practical advice that were taken from the Bible and other secular sources including Ovid. The text is accompanied by an index with an interesting reference system that makes use of both numbers (referring to the Sundays within one year) and letters, dividing each sermon into smaller sections. This mnemonic device is duly described in the preface. The index is followed by fifty sermons in Latin regarding Lent (from 27a to 252b); a list of sacred readings for the main festivities of the year (from 253a to 268b) and a final list of meditations, with the unusual explicit at colophon, in which the date format is shortened to ‘76’, hence omitting the millennium and the century.

The splendid decoration of this book also appeared in other books printed by Johann Zainer’s workshop and it was praised by William Morris as being one of the finest examples of woodcut decoration of the fifteenth century:

“It should here be said that, apart from their pictures, the Ulm and Augsburg books are noteworthy for their borders and letter decoration. The Ulm printer, John Zainer, in especial shone in the production of borders. […] A very handsome border (or half-border rather), with a zany in the corner, is used frequently in J. Zainer’s books, e.g. in the 1473 and 1474 editions of the Rationale of Durandus, and, associated with an interesting historiated initial O, in Alvarus, De planctu Ecclesiae, 1474. There are two or three other fine borders, such as those in Steinhowel’s Büchlein der Ordnung, and Petrarch’s Griseldis (here shown), both of 1473, and in Albertus Magnus, Summa de eucharistiae sacramento, 1474.”

In the two editions of this particular work produced by Zainer, the usual jester of the border is skillfully substituted with a doctor sporting a tall hat instead of the jester’s pointed one. As also recorded by Morris, this kind of printed decoration was rapidly dismissed in favour of new Renaissance layouts, making such decoration a true rarity. Furthermore, most of these borders and initials were often heavily painted. This book displays an exceptional state of preservation, which allows observing these decorations in their original, untouched state. Although the provenance of this book is uncertain, the lush decoration of the covers from the nearby city of Landshut also testifies of the high quality of this commission.