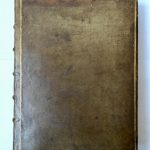 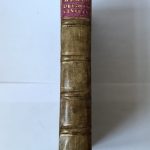 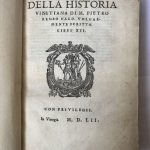 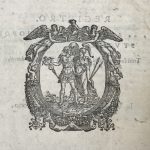 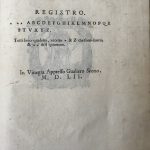 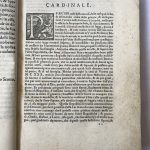 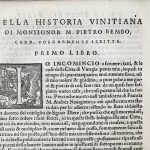 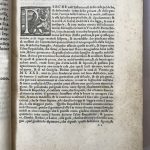 First edition of the vernacular translation of the Historiae Venetae libri XII of Cardinal Pietro Bembo (1470-1547), which was posthumously published in Latin in 1551 by the heirs of Aldus. An Italian scholar, poet and literary theorist, Bembo was an influential figure in the development of the Italian language, specifically Tuscan, as a literary medium, codifying the language for standard modern usage. His writings assisted in the 16th-century revival of interest in the works of Petrarch. Bembo’s ideas were also decisive in the formation of the most important secular musical form of the 16th century, the madrigal.

The dedicatee of this work was a beautiful and learned noblewoman named Elisabetta Querini (d. 1559), who was very close to Bembo and his Venetian circle, in which figured the great painter Titian, Francesco Sansovino, Carlo Gualteruzzi, the great literate Pietro Aretino and many other relevant protagonists of the Venetian Renaissance. Elisabetta became the inspirational muse of the circle. She was in an intimate friendship with Bembo and thanks to her efforts, the scholar consented to the translation of his ‘Venetian Histories’ into the vernacular. Once Bembo became a cardinal, he moved to Rome interrupting his assiduous frequentation with Elisabetta. Giovanni della Casa, who was apostolic nuncio in Venice, helped the exchanges between the two, and he is also likely to have had an affair with this lady in later years. Many are the sonnets devoted to Elisabetta, especially by della Casa, in which she is defined as the “Magnificent”. After Bembo died in 1547, Elisabetta strongly exerted herself in order to have the vernacular translation of the History published in Venice, an event that was initially opposed by Gualteruzzi, who was appointed to the role of commissioner of Bembo’s writings together with Elisabetta’s great-uncle, the prominent aristocrat Girolamo Querini. Eventually Elisabetta succeeded in her purpose and the translation appeared in Venice in 1552. Even though the work was signed by Gualtiero Scotto, the printer of the book, it is acknowledged that Guateruzzi translated and edited the text, whose preface has it so: “To the magnificent and valorous milady Isabetta Querini”.

Commissioned by the Venetian Senate to Bembo, the present work is a continuation of Andrea Navagero’s History of Venice, which was first started by Sabellico, bearing the title ‘Historia rerum Venetarum ad urbe condita’ (“History of Venice from the foundation of the city”).