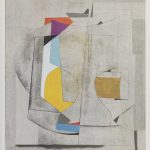 Ben Nicholson (1894 – 1982), was one of the most important British Cubist painters of the early 20th Century. He formed his style on artists such as Henry Moore and Barbara Hepworth, with whom he was married for some years. In Paris, he met Mondrian and Picasso, who also gave a decisive contribution to Nicholson’s painting.