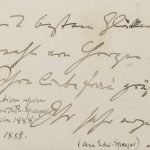 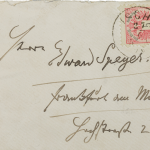 Two business cards of Johannes Brahms, both from Vienna, Karlsgasse 4.

The first has, on verso, an ms. note dated 23 March 1888, with a further note in a different hand stating that it gives ‘congratulations upon birth of Edward R. Speyer, born 18th March 1888’. With envelope, also in Brahms’s hand, addressed to Edward Speyer in Frankfurt-am-Main and postmarked 23rd March 1888. Edward was

The second has another indecipherable note on verso, and a later transcript in German, stating it was sent from Vienna, on the 27th June 1890. This is also accompanied by an envelope addressed in Brahms’s hand to Edward Speyer, Frankfurt-am-Main, and is postmarked 27 June 1890.

Edward Speyer was a German/English music agent and collector and a close friend to Brahms. He met Brahms in 1887 and they remained in contact until Brahm’s death. His collection of musical scores was one of the best in Frankfurt and contained the works of all the greatest composers of the time.