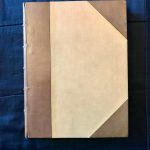 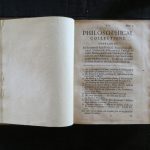 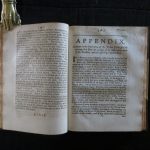 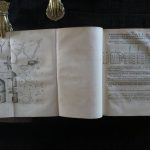 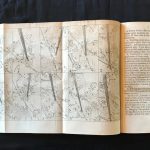 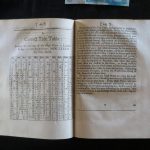 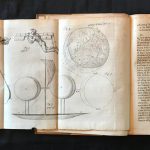 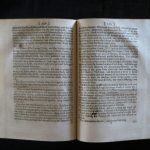 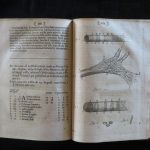 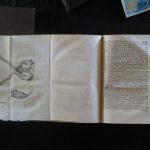 The polymath Robert Hooke (1635-1703) was authorised by the Council of the Royal Society to publish the Philosophical Collections after the official Transactions ceased their publication because of Henry Odenburg’s death in 1677. Ordinary publication of the Transactions was then resumed in January 1682- 3. The purpose of the journal was to provide an up-to-date account of any scientific topic, such as physical, anatomical, chemical, mechanical, astronomical, optical, natural-philosophical and natural-historical observations, and to advertise the publication of such books.

Complete sets of these seven numbers are very uncommon. The present volume also includes anatomical and medical studies. Hooke here published important papers, especially ‘An Optical Discourse’, which concerned a cure for short-sight. in the present collection, one could also find Leeuwenhoek’s discovery of spermatozoa through the study of animal semen; Lana’s “flying chariot”; Borelli’s De motu musculorum; Tyson’s ‘Anatomy of a Porpess’ (sic!); and astronomical observations by Hevelius, Flamsteed, and Cassini on the eclipse of Jupiter by the moon in 1679 and 1681. Furthermore, major discoveries by Malpighi, Moxon, Thomas Burnett, Edmund Halley, Bernoulli, and Leibniz are published in this series for the first time. The plates show Bernier’s flying machine, Borelli’s underwater breathing apparatus, and a new lamp invented by Robert Boyle. William Brigg’s A new theory of vision, a discussion of the optic nerves, is accompanied by a plate illustrating a dissected eye; this detailed physiological study of vision motivated Newton to republish it in 1685 with his own introduction. The Royal Society, founded in 1660, is the oldest scientific society in Great Britain and one of the oldest in Europe. Founders and early members included the scientist Bishop John Wilkins, the philosopher Joseph Glanvill, the mathematician John Wallis and the architect Christopher Wren, who wrote the preamble of its charter.