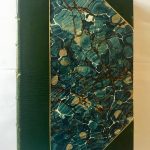 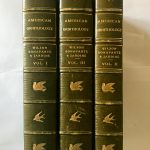 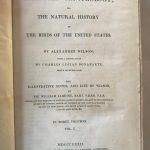 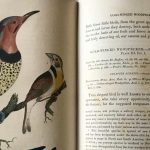 WILSON, Alexander. American Ornithology; or, The Natural History of the Birds of the United States. By Alexander Wilson; With A Continuation By Charles Lucien Bonaparte, Prince Of Musignano. The Illustrative Notes, And Life Of Wilson, By Sir William Jardine, Bart. F.R.S.E. F.L.S.

8vo, 3 vols. Illustrated with an engraved portrait frontispiece of Wilson in his shooting costume and 97 fine hand-coloured plates. Bound in later half straight-grain green morocco with single gilt fillet along inner edges and marbled paper over boards. Fine binding by Stikeman for Charles Scribner. Spine with gilt titles and date to spine in six compartments with low-raised bands. Birds gilt-tooled. T.e.g. Wood (page 630) notes that the text is a reprint of Wilson’s original text including the later notes by Jardine as well as a reprint of the first three volumes (all then published) of Bonaparte’s American Ornithology. The original plates of both authors were re-engraved by Lizars on a smaller scale on glazed drawing paper. Wood also notes that the backgrounds of the plates were left uncoloured. Some restoration to the bindings, but a generally sound and clean set.

The first Jardine edition of a key work on the study of American birds. Alexander Wilson was the first ornithologist to undertake a systematic study of the birds of America. Wilson turned to the study of American ornithology in 1802 under the tutelage of William Bartram. At the time of the appearance of the first part of his grand work in 1807, no similar study in any branch of natural science had yet been undertaken in America, and only one colour-plate book of any scope had been published in the infant nation (Birch’s Views of Philadelphia). Between 1808 and 1813 Wilson managed, after overcoming innumerable difficulties, to travel over much of the United States collecting material whilst also managing his ambitious publication. He died in 1813, exhausted by his task, and the final parts of the first edition of his work were eventually seen through the press by his friend George Ord. After the defeat of Napoleon, various members of the Bonaparte family took refuge in America, including his nephew, Prince Charles Lucian Bonaparte. The young Bonaparte proved to be an ornithological prodigy, and undertook the writing of a supplement to Wilson, which was completed in 1833. The contemporary importance of Wilson’s work can be judged by the fact that the present edition – edited and with a biography of Wilson by famed ornithologist Sir William Jardine – was published the year before the appearance of the final volume of the Bonaparte supplement. This first Jardine edition contains all of Wilson’s work and the first three volumes of Bonaparte’s continuation, with all plates re-engraved to scale by Lizars.

“This is by far the best edition of the American Ornithology, both on account of the beautiful plates and the most interesting notes of the editor”. Neville Wood in Allibone, A. Critical Dictionary of English Literature, 1854.