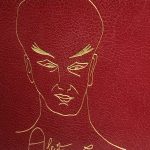 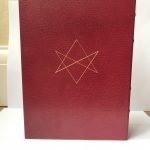 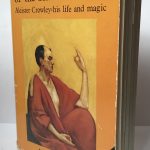 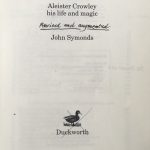 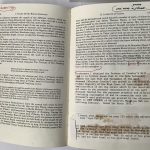 SYMONDS, John. The King of the Shadow Realm. Aleister Crowley: his life and magic.

8vo, pp. x [ii] 558. Paperback, worn. Copy with author’s revisions of “The King of the Shadow Realm”, to be retitled “The Beast 666” (1996). Symonds’ pen notes, corrections and typed paste-ins found extensively throughout. A magnificent Solander box, sumptuously bound in full red morocco with a stylised portrait of Crowley and his signature gilt on front cover. Spine in 5 compartments with raised bands, stamped title and the unicursal hexagram, one of the important symbols in Thelema, probably derived from Blaise Pascal’s Hexagrammum Mystichum.

John Symonds’ own corrected copy for the fourth edition of his biography of Aleister Crowley, to be entitled “The Beast 666”. The first and second editions (1951 and 1971) had been called “The Great Beast”, while the third (1989) was titled “The King of the Shadow Realm”. The work was described by Colin Wilson as “a kind of appalling classic”, as it illustrated Crowley’s absolute depravity.