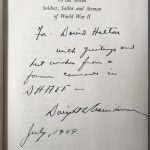 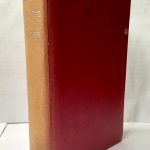 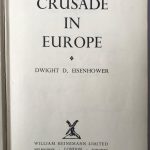 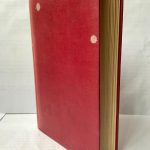 8vo, 2nd ed. (1st UK ed.), pp. 582, half title, half tone plates, numerous maps to the text. Lacking dust jacket. Red cloth over boards and silver lettering to faded spine. Two small white stains on front cover, pastedowns with maps of occupied Europe. Lower hinge fragile and slightly cracked, still resistant though. Blind-stamped logo of The Windmill Press (Kingswood, Surrey) on rear cover. Author’s presentation copy inscribed on dedication page (To the Allied Soldier, Sailor and Airman of World War II): “For David Halton with greetings and best wishes from a former commander in SHAEF, Dwight Eisenhower, July, 1949.” A very good copy. SHAEF was Supreme Headquarters, Allied Expeditionary Force. In December 1943 Eisenhower became commander of the Allied invasion of Europe, and from October 1944 he commanded all the Allied armies in the west. In 1952 he was elected 34th President of the United States.

Eisenhower’s account of war, widely thought to be one of the finest American military biographies, the NY Times considering that it gave “the reader true insight into the most difficult part of a commander’s life.” This is a later printing; the first edition was published the earlier the same year.