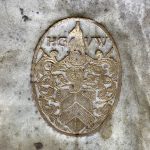 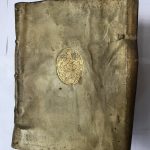 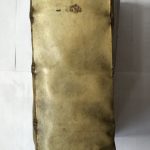 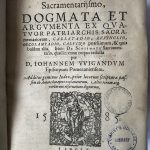 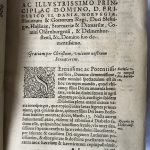 Johann Wigand (1523-87) was a German Lutheran cleric and theologian. He served as Bishop of Pomerania and took part in the Reformers’ debates about sacraments, which focused on the issue of the Lord’s Supper. The participants to these debates were important theologians from different branches of the Reformation. The Lutherans – such as Johannes Brenz, Niels Hemming, Nikolaus Amsdorf and Tilemann Hesshusen – were opposed to the representatives of Reformed confessions, such as John Calvin, Heinrich Bullinger, Theodore de Beze, Pier Martire Vermigli, Jan Laski and Valerand Poullain. In this work, Wigand illustrated and countered the arguments of Karlstadt, Zwingli, Oecolampadius and Calvin.

The owner of this book was Johann Georg von Werdenstein (1542–1608), canon of Augsburg and Eichstätt, who collected a very substantial library consisting of tens of thousands of books. Werdenstein came from an aristocratic family and entered the Catholic Church, becoming a canon of Augsburg Cathedral in 1563, and adding a further canonry at Eichstatt in 1567. Around 9,000 volumes from his library including many musical items were purchased in 1592 for 6,000 florins by the Duke of Bavaria, for the Ducal Library in Munich, now the Bavarian State Library.