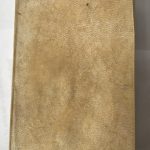 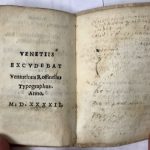 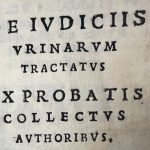 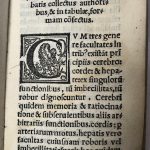 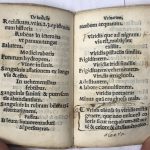 This collection of medical opinions and observations on urine draws from the works of several authors. It is preceded by an introductory letter from a certain Antonius Stupa, “Rhetus”, to the Italian-Swiss physician Johann Nikolaus Stupanus from Chiavenna.

According to Renaissance medicine, the human faculties originated from three organs: brain, heart and liver. The proper functioning of these organs was believed to determine the patient’s healthy constitution. If the brain regulates memory and thinking; and the heart keeps our blood moving; the liver shows its conditions through urine. This book lists the different types of urine, according to their qualities and prescribes the appropriate remedies for each condition. The analysis of urine was considered to give an indication of the balance of the four humours, which was held to be crucial to good health.

Even though the present edition does not bear the author’s name, physician Jean Vassé wrote this short treatise. The author Jean Vassé was a physician and dean of the faculty of medicine at the Collège de France, and a professor at the University of Salamanca. Vassé was one of the earliest translators of Galen from the Greek into Latin. This work was first printed in Paris in 1537, then in Lyon in 1544 and 1545, and in Venice in 1549. Llwyd Humphrey translated it into English in 1553 (ESTC S101781).